(We divide 4 sections for each sword as Saijyo saku, Jyo-jyo saku Jyo saku and regular saku)
This sword belongs to Jyo Jyo saku ranking.
The blade was polished.
Habaki : silver double habaki.
Blade length : 71.4 cm or 28.11 inches.
Sori :1.2 cm or 0.47 inches.
Mekugi : 2
Width at the hamachi : 3.97cm or 1.563 inches.
Width at the Kissaki :2.11 cm or 0.83 inches.
Kasane : 0.7 cm or 0.83 inches.
The weight of the sword : 780 grams.
Era : Edo period Enpo era.
Shape : The blade is rather long, wide and thick
with deep sori and longer kissaki.
Jigane :koitame hada and itame hada mixed
with jinie attch and visible to see the texture well.
Hamon :Niedeki round gunome midare
with thick nioikuchi with ashi soft feeling habachi.

Special feature: Higo Kami Yoshitsugu was born
at Hitachi province and muved to Edo.
At shiokome shurine at Miyazaki prefecture,
a sword was dedicated by Yamano Kanjyuro Hisahide
which is very wide wakizashi which was named Higo Kami
Yoshitsugu. The signature is mentioned as follow.
So the reason he lived Hitachi province.
He was reported as a student of the Hojyoji Masahiro
and got the title of Higo no Kami. At Kanbun era,
he became a craftman of the Shimazu daimyo family
and moved to Kagoshima. His subjects looks like Kotetsu
and Kazusa Kami Kaneshige which swords are Gunome midare
with thick nioikuch like this sword.
Some parts are aranie sunagashi, and Kinsuji scatter brigth Hamon.

From Aoi Art : In his sword, He made Sashu Ju Higo kami Tachibana
Yoshitugu and influenced Satsuma sword makers.
He moved to Edo and became a student of the Hojoji school.
His work is very similar with Kaneshige or Kotetsu.
During world war time, some family’s son graduated
army officer’s school and became an officer.
His parents celebrated his army officer and praying his success
at the warfront and returned safely as same idea
as every country’s family’ hope. 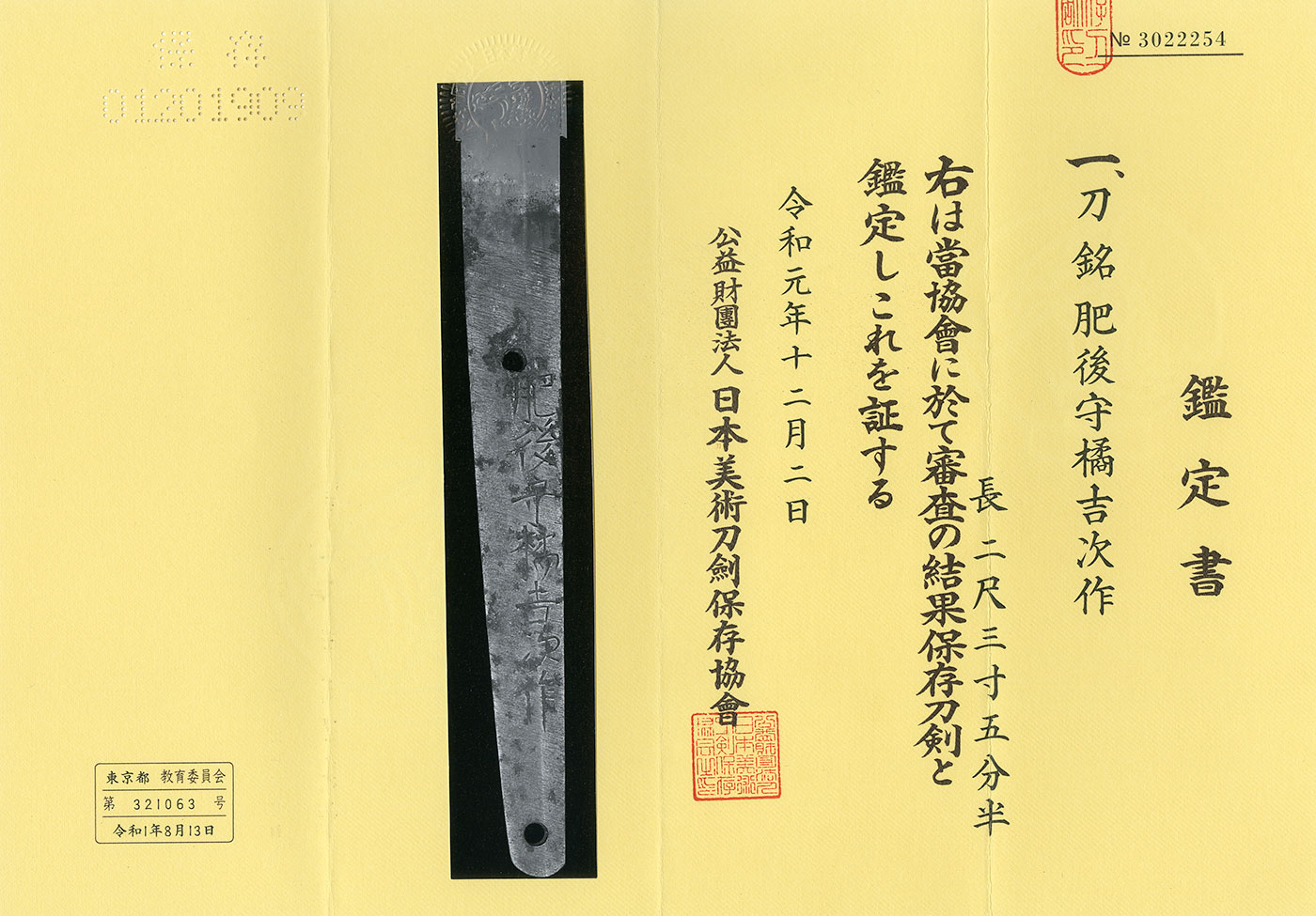