History of a simple Japanese sword
World civilizations were learned during elementary school in the Nile
basin of Egypt, the Indus river in India, the Huang river in China,
the Tigris in Mesopotamia, and the Euphrates river basin.
l Japanese swords are believed to have been introduced to Japan from
mainland China via the Cyosen Peninsula. Initially, in the Yayoi
period, copper swords made of copper were imported from the continent,
and then iron swords were imported, especially short swords called
warabite. There is a picture of a soldier sitting on his warabite in
haniwa. In addition, straight swords are now being imported. Around
this time, even in Japan, straight swords were produced under the
guidance of migrants. Perhaps in Japan, their migrants should have
been given preferential treatment.
It is thought that they are comfortable and have settled in the Kyushu area.
Imagine it was a sword, they soon got a hatchet-like weapon made of
ironware called a warabite. At first, there were many zubuyaki (all
hagane), but I think that the sharpness was improved soon after the
invention of the technique of soil filling. Eventually, a straight
swordswere produced. It is said that the number was quite large.
Eventually, a straight sword was produced in Japan, and there are
still images that were owned by Syotoku taishi and other high ranking person.
Many current Japanese scholars such as Heish Syorinken and shichi seiken say that
these swords were made in China.
In the case of sword name mumei and called Heishi syorinken First of
all, there is an opinion that jigane was made in Japan because it is a
good jitetsu that has a good mochi hada, so a work of such a good
jigane was produced in China. It is also doubtful whether it was done
or needed. In China
I would like to compare it with the straight swords currently left in
China. The good thing about jigane is that without the technology to
polish the sword that was made, jigane will not develop. Heishi
syorinken’s jigane is a work with a superlative soft atmosphere. It
was exhibited at the Tokyo National Museum in 1997, but it was
exhibited before that. I was still young, so maybe 60 years ago. At
that time, the security was not so strict, so I remember watching it
clearly and well through the glass. Most of the remaining straight
swords are excellent in this Heisi syorinken while there are many
rough jiganes. 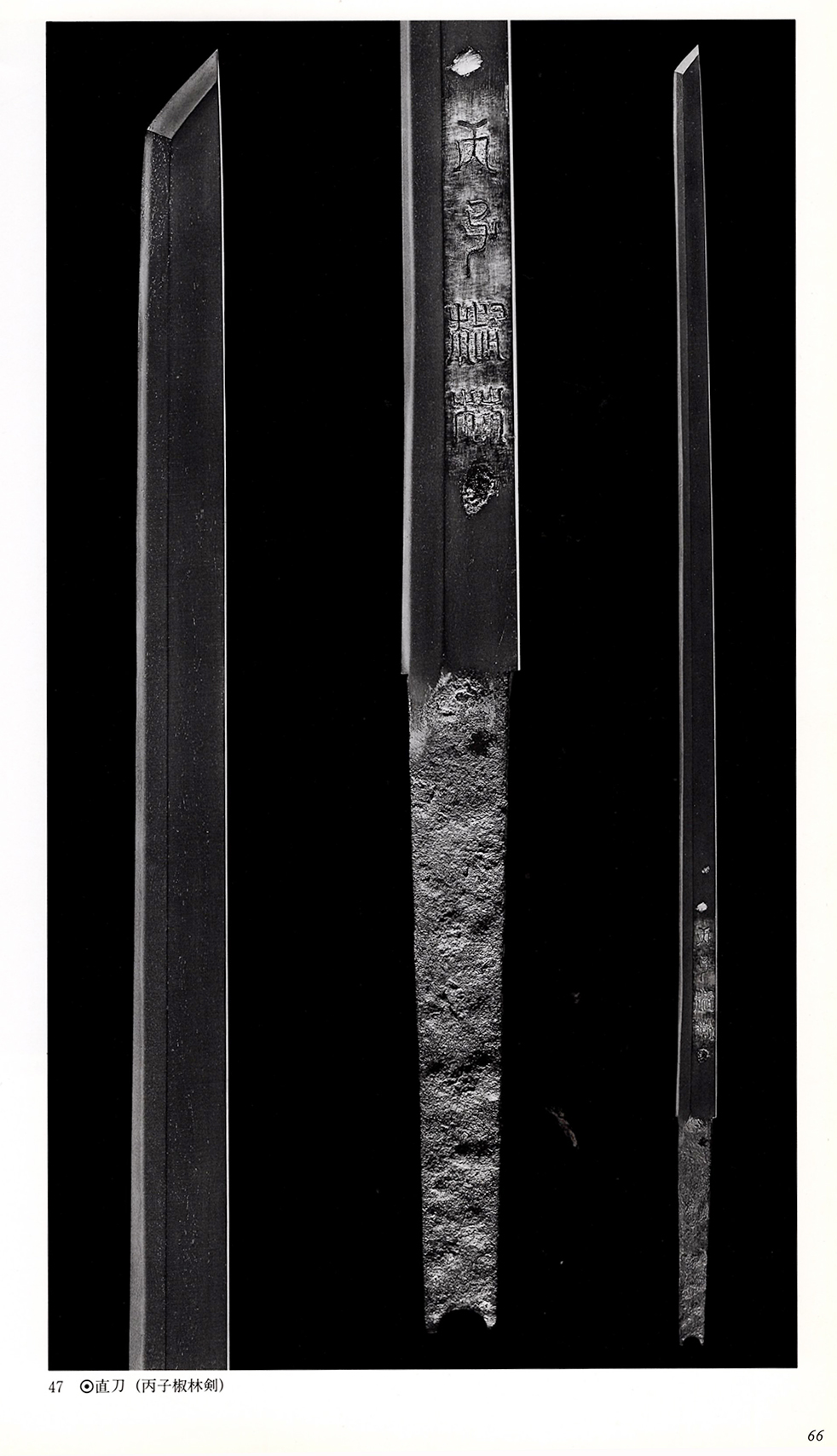 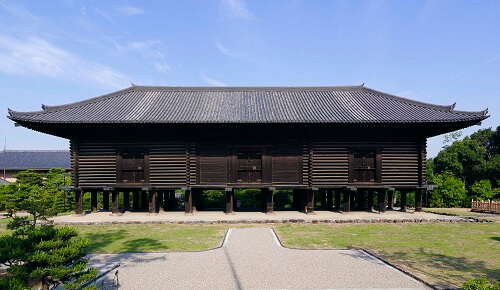 Many swords and sword fittings are stored in Shosoin, and some of them have
leaked out, but surprisingly there are still quite a few, so you can understand the
form of the swords at that time. Perhaps these straight swords were only used for
ceremonies or by fairly high-ranking people, and the sword fittings were
considered to have been the ultimate in luxury. However, the only jewels and
valuables in Japan were gold, silver, magatama, and jade, so the parts would
have been decorated with sculptures and precision images by painters. Therefore,

it seems that we have found value in polishing technology and the function of the
blade in Japan. In foreign countries,The king who receives the tribute is interested
in Tanto and Koshirae (mountings) of the sword overseas, and probably handed it
to the king as a tribute by sprinkling it with gold and silver, diamonds, turquoise,
sapphires, rubies, and other jewels. You can see the king’s big smile and the
golden teeth on his back teeth.
There are no jewels in Japan, and I think Japanese have created an environment where
They can work hard to produce good bullions(Jigane) and blade patterns and brag about
them. In the process of shifting from a straight sword to a bay sword, a work called
Kogarasu Maru was produced as a work in the middle of the Heian period.
It is said that it was made in the process of turning from a straight sword to a
bay(warped) sword, but since it looks really strange, future research is awaited. The
kenukigata tachi straight sword has a sharp tip, but the warp(sori) is shallow and it
continues after the work that strongly warps at the stem part.
In order to insert the sword from the straight sword to the waist, the sword (horizontal
sword) that goes to the tip of the warp will appear at the waist.
Masterpieces such as Sanjo, Tomonari, Masatsune, Kuninaga, and Yasutsuna came
out, and in the Kamakura period, a variety of works were produced, from straight blades
to small midair to gorgeous cyoji midair hamon irregularities. It will be done.

Most of the works at that time were Muku kitae trained, and their characteristics will
continue until the Nanbokucyo period. After that, it will be continued to the Muromachi
period and the Edo period, but the body of the sword differs depending on the period,
and in the Nanbokucho period there are many long swords of important destinations,
and it is necessary to fight on the ground in the middle of the Muromachi period. A sword
with a short length swords around 60 cm, which is easy to swing with one hand, has
been made because of its nature.
Demand for Japanese swords will increase during times of intense war and will be
produced in large quantities, but demand for swords will drop sharply during peaceful
times.
For example, many swords and guns were produced at the end of the middle Muromachi
period, but in the Edo period, the demand for swords suddenly cooled down due to the
peaceful era, and many swordsmiths desperately moved to rural areas to eat. It will go
on.
Although there was a large amount of Tanto production during the Warring States period
at the end of the Muromachi period, orders dropped sharply during the peaceful period
of the Edo period, and the production of tanto from the Edo period Keicho to the middle
of the Edo period almost disappeared. If you find a tanto during this edo period, it’s a
rare item.
For this reason, from the time of Kanbun in the Edo period to the time of Genroku, many
swordsmiths sought out swords that could sell and worked hard to create swords that
sold better.
A sword with a cutting test swords, a work that engraves the blade, a turbulent(Kawachi
Kami Masahiro) blade,c, a gorgeous Bizencyoji midair hamon produced by Mitsuhira,

etc. Gunome midair are welcomed, suguha midair are created, deep Gunome midair are
deeply scented, and straight blade ,Masame hada.
THey were able to enter the golden age of Japanese swords because the beautiful
Hizen swords of thejigane desperately produced beautiful works, but on the other hand, I
think that there were quite a lot of swordsmiths who quit without orders.

Until the end of the Tokugawa shogunate, the demand for swords stopped, and the
swordsmiths had the opportunity to quit their jobs. Japanese swords may also move into
an era of being selected.
I think some sword smites changed their jobs to became a carpenter. Eventually, at the
end of the Tokugawa shogunate, it became a busy era.
Orders for Japanese swords flooded the swordsmiths and brought them back to life.
Many works were produced in Kyushu, Shikoku, Bizen, Osaka Settsu, Edo, and Aizu.
Eventually, the army was established and Japanese swords were allowed to be held in
order to fight against China and Russia, and the disciples of swordsmiths who were
active in the Edo period began to produce swords, and the imperial artist system
centered on Gassan Sadakazu Although it was established, many swordsmiths had quit
making swords, so there were few swordsmiths who inherited it, and their skills were
considerably reduced.
Even so, as the times changed from Meiji, Taisho, and Showa, Navy and Army officers
had to possess Japanese swords, so many swordsmiths produced many works and both
the Army and Navy trained swordsmiths. Among them, the Yasukuni sword was
produced mainly by the Army in the precincts of Yasukuni Shrine, and the Navy’s Guntō
was produced at Minatogawa Shrine.
Many other swordsmiths and swordsmiths were created to meet the demand for officers’
swords.
Inferior swords that were not trained and Mantetsu swords made in Manchuria were
produced because of lack of time and in order to produce inexpensive works.
Eventually the war ended and the possession of Japanese swords was prohibited again.
Many swords were confiscated and there was an expeditionary force in Japan at that
time.
Mainly Americans. Englishman. Many Americans, consisting of Australians and Indians,
brought back about three Japanese swords to the United States and other countries to
commemorate the victory of the war.
A few years later, Dr. Kaoru Honma and many other prominent figures asked the
Japanese to own Japanese swords through Mr.Colonel Cadwell, who was the
captain(colonel)of the United States and after that Their requested was permitted to hold
Japanese swords by Japanese.
Japanese people was a permit issued by the US military, but from 1951, a registration
system by Japanese people was completed.
In addition, the production of Japanese swords was also approved.
The first is a Tanto that the Japanese government gave to Lieutenant General Walker?
It was a work in which Takahashi Sadatsugu cherry blossoms were carved. General
Walker died in a car accident on the Korean front and his taunter was for sale in the

United States later on.
Actually, I bought it and sold it in Japan.
I had the opportunity to see it again decades later, and I was impressed with the
passage of time.

In any case, at the new masterpiece exhibition of the Japanese Sword Museum, a non-
inspection system was established for extremely excellent swordsmiths, so the

production technology has improved dramatically and some swordsmiths have become
living national treasures. Not only are they owned by Japanese, but the number of
overseas swordsmiths is increasing.
Foreign swordsmen possess considerable knowledge, and books published by them
have also been produced, and in particular, photographic images have become so
skillful that Japanese people are enthusiastic about them.
I participated in a painting auction in Ginza the other day, and the hanging scroll of
Uemura Shoen’s masterpiece was put up for sale. The price was a whopping 90 million
yen.
Compared to this, I sighed that Japanese swords are cheap. Meanwhile, the Meiji era.
Taisho. Showa’s famous paintings were sold at a fairly low price, and it is good for
studying the passage of time and the causal relationship with the artist.

I wrote about the history of “Easy Japanese sword”.
Naturally, many Japanese swords were produced between war and peace, and
production decreased drastically. In order to produce better works of Japanese swords in
an era when the world calms down and the swordsmiths live desperately, masterpieces
were produced in an era when it was difficult to sell them. It is probable that the
swordsmiths who did not fit were in a difficult move to Tokyo, where they had to drop out.
Let’s meet again online