About stains(shimi)
At the moment when the sword is made, you can clearly see the blade
pattern like the blade pattern shown below.
However, if polishing is performed due to blade spillage or rust, the
blade pattern will naturally be polished.
The odor becomes deeper in the first stage.
The deepening of this scent means that the blade pattern inside the
sword is polished.
When it reaches the second stage and is polished again, the blade
pattern has a deeper odor and is like the earliest.
The crest is not clearly visible and it becomes a soft and vague part
Since the inside of the sword is further polished in the third stage,
the blade pattern on the surface is a voyat blade pattern.
It will be.
When polishing is performed in the 4th stage, the inside of the blade
pattern is almost covered with white haze, and the function of the
blade pattern is completely invisible. This condition is called a
stain.
In particular, Bizen items are prone to stains, and Bizen Saburo
Kunimune is quite prone to stains.
The reason is that the quenching temperature is low. Soshuden has a
high quenching temperature and makes a clear crest, so even if it is
sharpened considerably, the blade crest remains.
Since the sword with this stain cannot be restored, some polishers use
chemicals to lift the blade. There is a part that cannot be said to be
necessarily useless from the point of view that Japanese swords are
currently appreciating. Amateurs should never go.
Look at the image
Let’s talk about stains (shimi).
1 This picture is a well-made work of japanese sword, and it is sound
and the blade pattern is clear. Of course, the works before the
Kamakura period were also in this state.
2 is a work that has been slightly sharpened, and the scent has a
slightly deep and soft atmosphere.
3 This picture is at the stage where the sword is polished
considerably, shimi becomes terrible, and the state of hamon is not
clear and it is presumed that it was cyoji midare hamon before.
The picture of 4 is the hamon inside the Japanese sword when yakiire.
The creator of sword makes hamon and yakiire the sword. If you put the
hardened sword in water and quench it, the blade pattern will become
hard steel. By polishing, hamon can be clearly made into a blade. When
polishing, hamon will come out clearly. As shown in the picture No. 4,
hamon is hardened not only on the surface but also toward the center
of the sword, but the surface becomes blurred as it goes inside. This
shimi cannot be fixed, so please take a closer look when purchasing.
Previously, I had sold a work corresponding to the third picture with
NBT HK tokubetsu hozon under the name of Nagamits, which was entrusted
to us by consignment sales. The price was very expensive, but when I
saw nagamitsu on the internet, a younger person came into the store to
buy it.
He completely liked it and told me his intention to buy. If this
customer was a business person, I would have sold it, but he refused
to sell it because he was a young person in his thirties who had
little knowledge. He reluctantly returned without being able to buy
it, but at a later date he came back to the store after learning that
I had sold the sword, and I squeezed in with a rather tight look as to
why you didn’t sell it to me. I explained about the stain. This
nagamitsu has passed the NBT HK Tokubetsu hozon token. It was a trader
who purchased the nagamitsu.
He was asked to introduce me something, and he introduced the item
designated as Jyuyo Token in the Bizen item at the end of the
Muromachi period, and he bought the sword and purchased some
masterpieces. .. I’m afraid that if he had purchased nagamitsu, he
would appreciate the sword on a daily basis and look for a sword
similar to the one he saw as the best sword of the Kamakura period. I
thought it must be.   However, is this Nagamitsu worthless? That is not the case. It is still the best work of Japanese swords. Even if hamon is all stained. Historically, it is a valuable resource to familiarize yourself with jigane at that time. 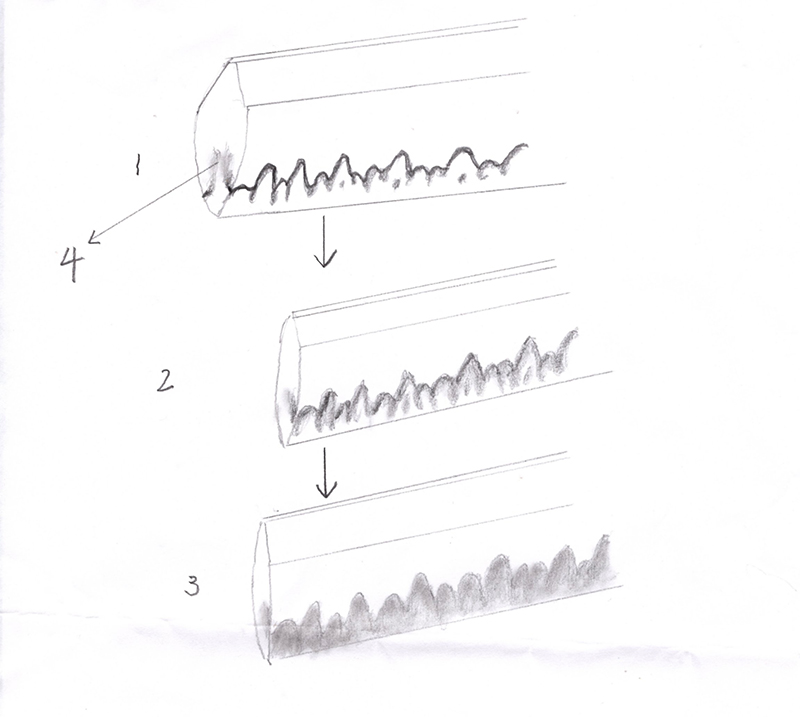