Signature: Oumi Daijyo Fujiwara Tadahiro
近江大掾藤原忠廣
Shinto: Jyo Jyo saku: Oowazamono; Hizen
(We divide 4 sections for each sword as Saijyo saku, Jyojyo saku Jyo saku and regular saku)
This sword belongs to Jyo Jyo Saku ranking.
habaki: Silver single Habaki
The blade was polished.
Blade length:55.0cm or 21.65inches.
Sori:1.7cm or 0.66inches.
Mekugi:2
Width at the hamachi:3.09cm or 1.21inches.
Width at the Kissaki:2.2cm or 0.86inches.
Kasane:0.78 cm or 0.30inches.
The weight of the sword:655grams
Era: The Kanei era, the Edo period
Shape: The blade is slightly broad and thick with deep Sori and longer Kissaki.
Jigane: Koitamehada is very dense. Beautiful Koitame: Hizen Jigane
Hamon: Niedeki, Notare and there are some changes. Nioikuchi gets deeper from near Monouchi, and Hamon becomes bright. Boshi is long.

Special feature: Oumi Daijo FujiwaraTadahiro(2nd) from Hizen province was born and named as Hashimoto Heisakurou as a legitimate son of Tadayoshi the First. Tadahiro was only19 years old when his father passed away in 1632 but he was enough skillful to forge sword at that time. Tadahiro succeeded to Omi-Daijo in 1641at the age of 29. His school flourished the most around Shoho and Keian era. He never succeeded to “Tadayoshi” Mei, he persisted to the Mei of Tadahiro. He was given 20-Goku and the house from Domain, and contributed to the development of Hizento. He had been making swords for around 60 years, and his style varies a lot depending on each work. He passed away in 1693 at the age of 80. He made tremendous swords, but there are some works that the 3rd made instead of him in his last years. His works are very sharp and designated as “Owazamono”. His Jigane is said to be the most beautiful among all Hizento, and also said to be the second greatest swordsmith, next to his father Tadayoshi. This work is broad and thick, very powerful work.

From Aoi Art: Generally his works have Suguha deki Hamon, it is really rare to see Gunomemidare. This work has very healthy Gunomemidare with active Sunagashi and Kinsuji in Hachu: a true masterpiece. We have no rough parts of Jigane, typical for Tadahiro works. We truly recommend this Jyo-jyo saku of Shinto, Owazamono. It is also well-polished. 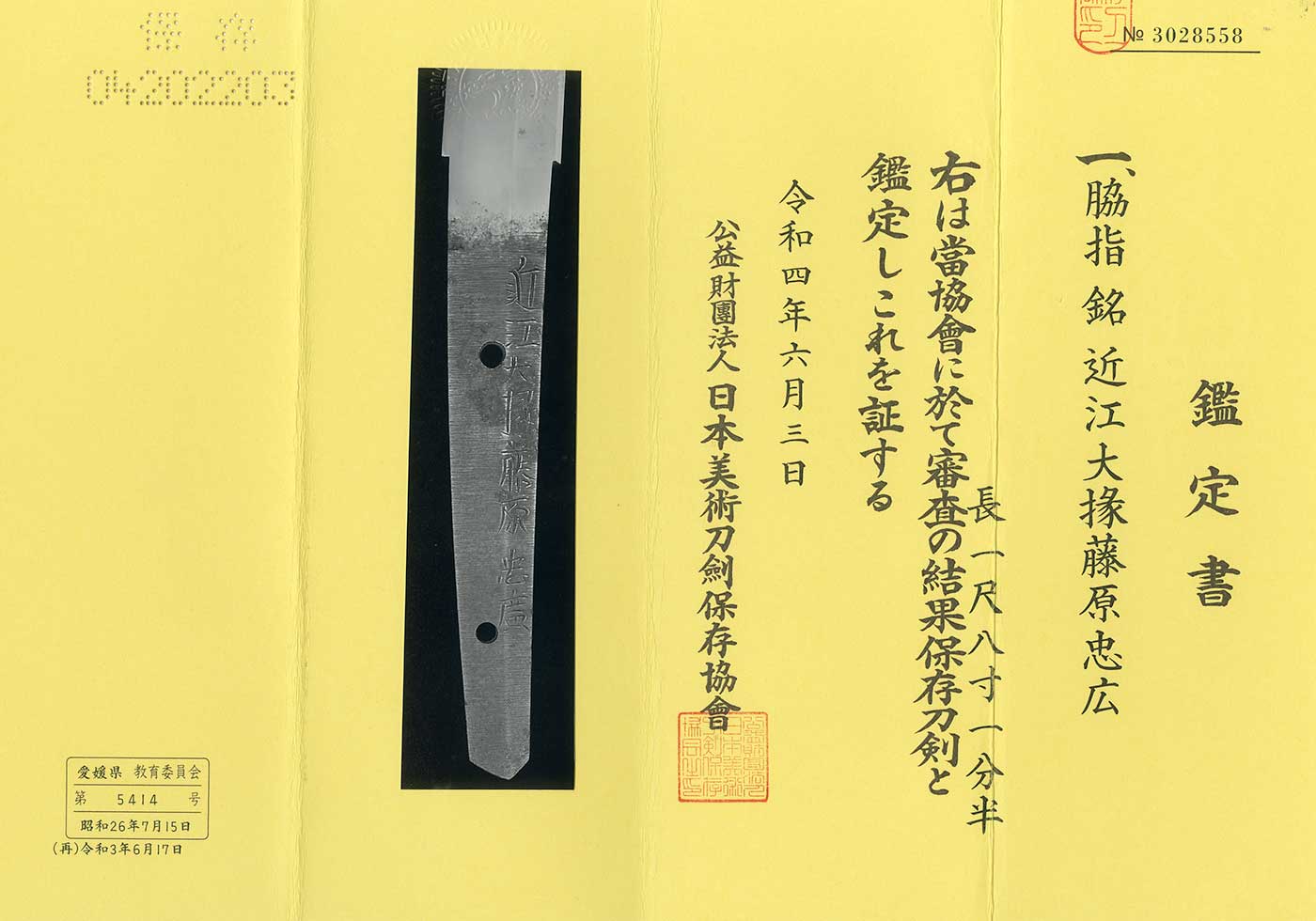