Special feature: Hizento plays an extremely important role in the Shinto times, each schools like Tadayoshi family(main family) made their swords. Tadayoshi 1st generation was born at Hizen Nagase village(present Nagase village) in Genki 3(1572), called himself as Hashimoto Shinzaemon, and was supposed to be originally from Samurai family. His grandfather, Uchizo Masa Morihiro, served for Ryuzoji family, however he died in Tensho 12(1584) at Shimabara by war. His father also died of illness in that year. Tadayoshi went to the house of Higo Dou Tanuki Zenbei, a sword smith at Nagasemura, and learned sword making from him. In Keicho 1(1596), the Domain ordered him and his schoolmate Munenaga to go to Umedtada Akitoshi school in Tokyo, and Tadayoshi learned sword making and Munenaga learned sculpturing. In Keicho 3 he came back home. He was transferred to Saga castle town and worked as an employed swordsmith at Nabeshima family, Saga Domain. The first Nenkisaku(works with production date) starts with the ones of Keicho 5(1600) at the age of 29. In Genna 10(1624) he went to Tokyo again and 30th of February in the same year the name of era has changed into Kanei. In Kanei 1(1624), he succeeded the Musashi Daijo and changed his signature to Tadahiro at the age of 53. He got home in the same year. He passed away on 15th of August 1632, Kanei, at the age of 61. Tadayoshi 1st has made swords for approx. 30 years, however, he had no poor works, every single sword is a beautiful one above average. Because his signature had 5 letters (肥前国忠吉), he was also called as Goji Tadayoshi(Tadayoshi of 5 letters). He was as skillful as Kunihiro in Kyoto, and was ranked at the best work of Shinto: Saijo O-Wazamono. In his family every representative except 2nd and 7th had succeeded the signature Tadayoshi.

From Aoi Art: Gojitadayoshi is the most famous in his school, and it can be estimated that this work had been made in around from Keicho 7 to 8. Kissaki is O-kissaki, the shape is good, Jigane is nice and Suguha Hamon is calm and nice. We truly recommend this piece of art as the top of the Hizen swords, which was also popular and attributed as “Saijo-Owazamono”. 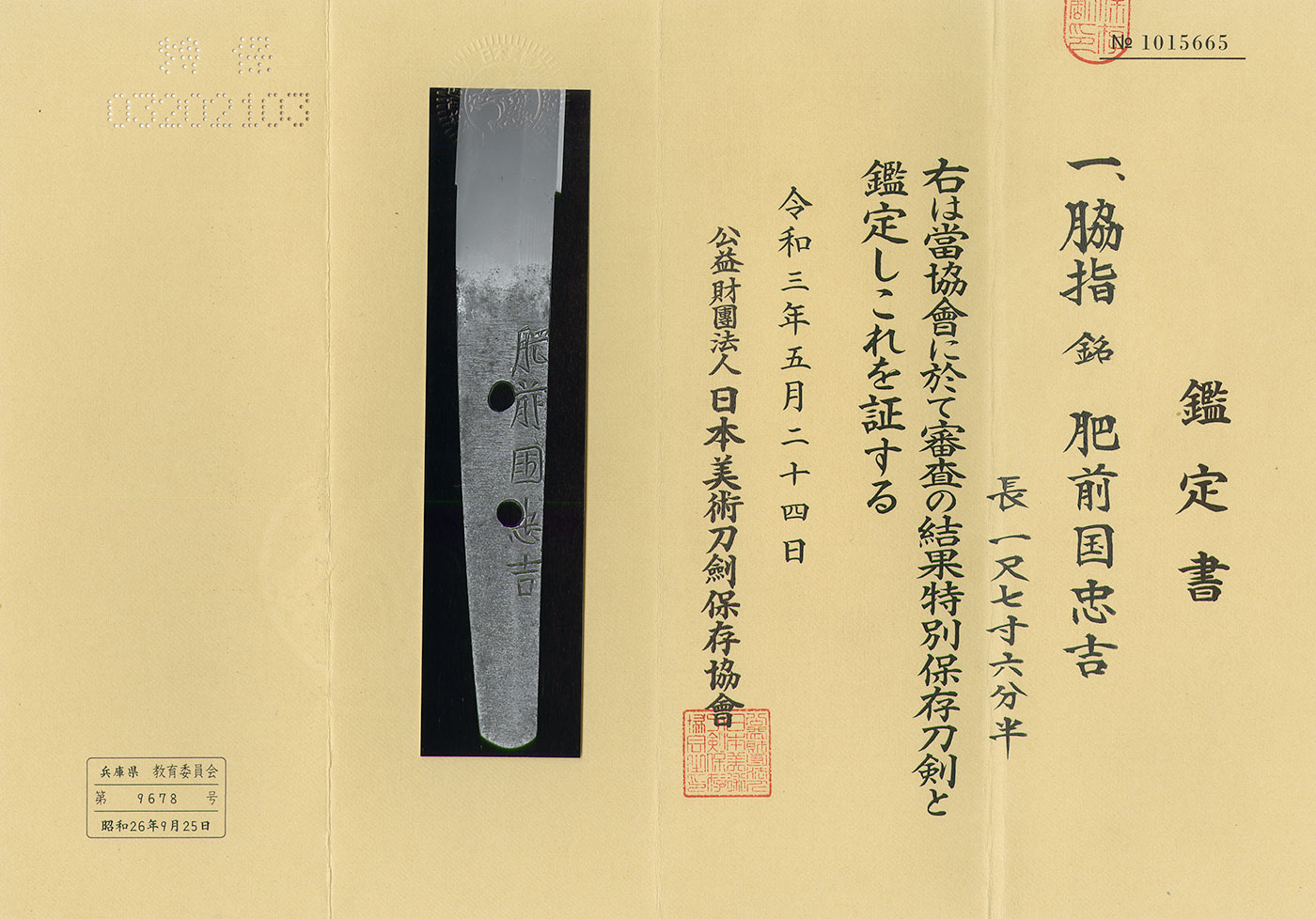