(We divide 4 sections for each sword as Saijyo saku, Jyo-jyo saku Jyo saku and regular
saku)
This sword belongs to Jo Jo saku ranking.
The blade was polished.
Habaki : Gold foiled double habaki.
Blade length : 47.9cm or 18.86inches.
Sori : 1.06cm or 0.42 inches.
Mekugi : 1
Width at the hamachi : 2,87cm or 1.13 inches.
Width at the Kissaki : 1.86cm or 0.732 inches.
Kasane : 0.64cm or 0.252 inches.
The weight of the sword 440 grams.
Era : Edo period meireki era.
Shape : The blade is rather wide and thick with small sori and longer kissaki.
Jigane :Koitame hada well grained with jinie attach beautiful fine texture which is called Osaka jiggle.
Hamon :from the Hamamchi, suguha hamon and then Nunome and Choji midare with thick nioikuchi. In hamon, many sunagashi, kinsuji work.
Bo-shi ir twist hamon and then round shape with thick nioikuchi.

Special feature:Born in Settsu, commonly known as Jinnosuke, he was adopted by the
first generation Sukehiro who was called Sojiro and lived in Tokiwa, Osaka.
Received Echizen Kami in the 3rd year of the Meireki era and was taken over by
Inabanosuke Aoyama of Osaka Castle in the 7th year of Kanbun.
He died on March 14, 2nd year of Tenna at the age of 46. A representative of Osaka
new swords and a master of new swords
According to one theory, it is said that he left over 1,700 works throughout his life. A new
sword withKotetsu.It is said to be athe best swordsmith and the Osaka new sword has
also been highly evaluated along with Inoue Shinkai, and it is a collaboration sword with
Shinkai.
It seems that there was also an exchange. However, with its popularity, many of the in-
brand items (swords with the name “Sukehiro”) are said to be fake. This work is a representative work of Osaka new sword with the style of the time inheriting the style of
the first Soboro Sukehiro, and is one of the best masters of new swords. According to
one theory, he left about 1,700 works in his lifetime. It is also called the Yokozuna of the
new sword along with Kotetsu of Edo, and is also highly evaluated with of Inoue Shinkai Osaka. Quoted from Wikipedia

From Aoi Art : It is a heroic work of the second generation Echizen Kami Sukehiro around Manji. In general, Sukehiro evaluates deeioikuchi Nunome midare and doran
midare hamon.
There are many people, but this long leg is also irresistible, and its characteristics will continue to be drawn to one rod, such as2nd generation Ikkanshi Tadatsuna will
continue to be pulled by loyalty. It is a masterpiece that has passed sNBTHK Tokubetsui
Hozon paper and is highly recommended. 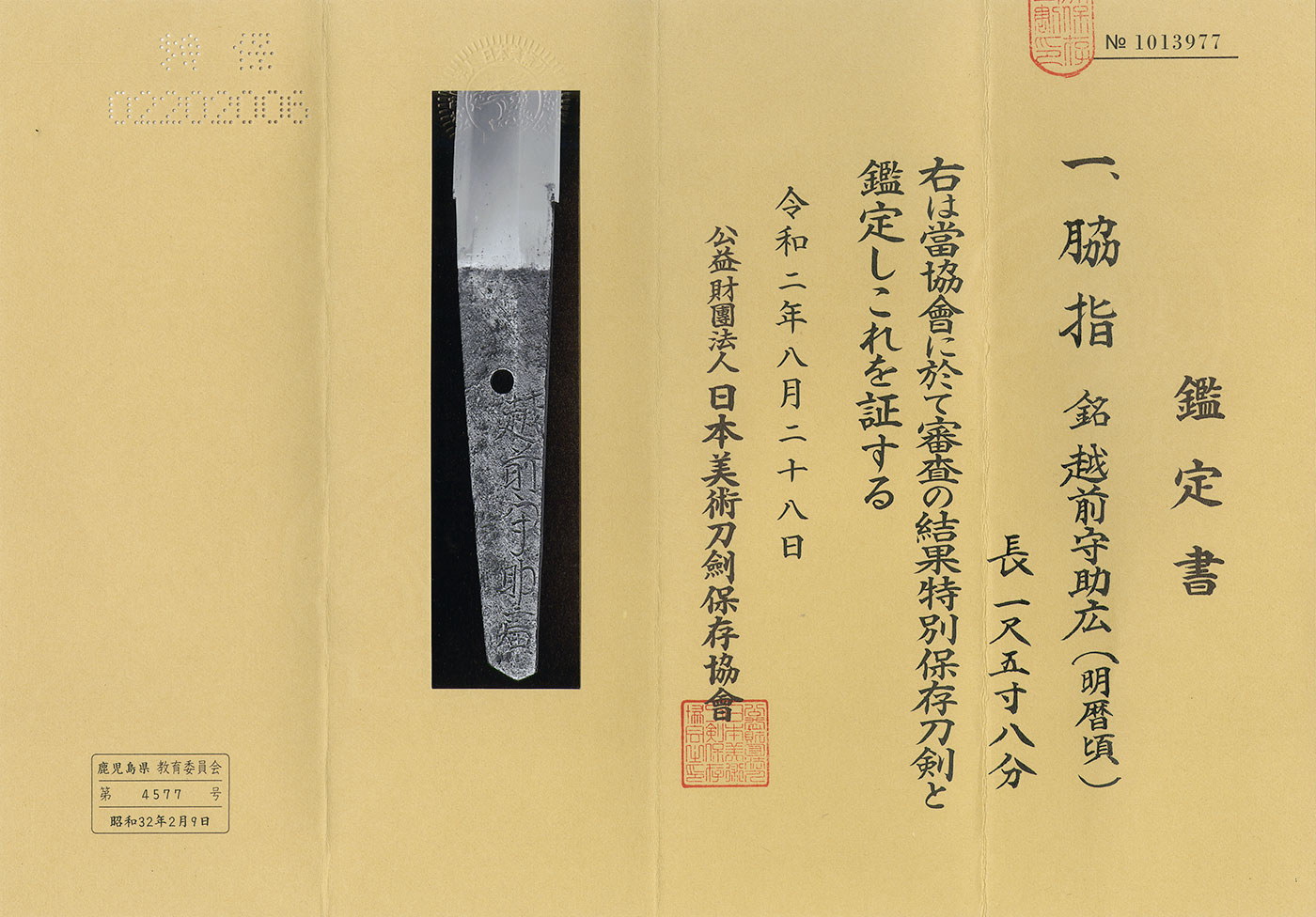