Shinto:Jyo Jyo saku: Ryo Wazamono: Settsu
The blade was polished.
Habaki: Silver foiled single copper habaki.
Blade length: 54.1cm or 21.29inches.
Sori:1.2cm or 0.47inches.
Mekugi: 1
Width at the hamachi: 3.38cm or 1.33inches.
Width at the Kissaki: 2.25cm or 0.88inches.
Kasane: 0.7cm or 0.27inches.
The weight of the sword: 670grams.
Era: The Edo period, around the Genroku era.
Shape: The blade is broad with width of 3.38cm, thick, long like Katana, and has longer Kissaki. A really powerful blade.
Jigane: Koitamehada gets closer well with Jinie
Hamon: Suguha from Hamachi, after that Chojimidare with deep Nioikuchi. Ashi works well and Kinsuji appears partially. Boshi turns back like Sansaku, and after that ends with Hakigake style.

Special Feature: From Mei, we can judge that this work is made in the Tenna era. The sword smith, Tadatsuna 2nd generation, was originally called Mandayu, later succeeded the title Ikkanshi Oumi Kami. He was good at making not only Ashinaga Choji, but also Doranba and Suguhadeki: very famous for his skills. Especially he was terrific at engraving and his dragon has very unique face expressions. He is one of the greatest sword smiths in the Edo period. Besides, this work was registered on the 20th of May, Showa 26 in Shizuoka prefecture as No.2846, which means that this work gained its registration just after the war ended: so to speak “Daimyo Registration” work. In Edo period, almost all Habaki were made of copper, and this work has a great silver-foiled copper Habaki.

From Aoi Art: Many of Jyo jyo saku sword smiths in the Edo period had gained tremendous reputation, such as Sukehiro, Inoue Shinkai, and Oumi Kami Tadatsuna on this work. They struggled the harsh times of the Edo period, finding how to survive. Sukehiro and Inoue Shinkai had made Doranba or Suguhadeki with deep Nioikuchi. Oumi Kami Tadatsuna had made engraving on the blade, or Ashinaga-Choji and Gunomemidare with deep Nioikuchi. This work has enough length and is really thick and broad. Solid and great work. Please preserve it well. 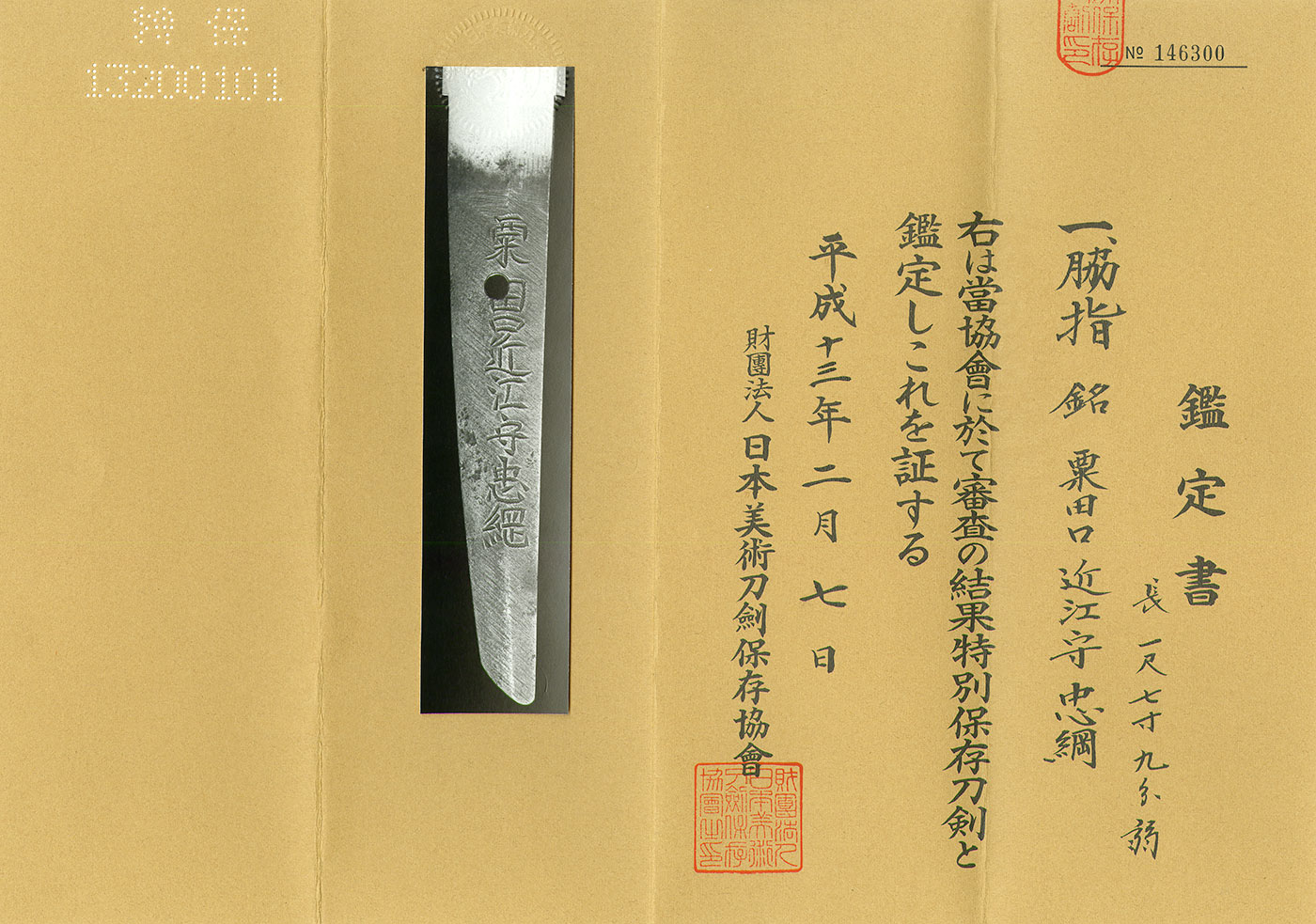