Ordering number: AS21425
Tanto in Shirasaya

Special feature:Fujiyasu Masahira is a sword smith from/in Fukushima prefecture. (His real name is Fujiyasu Masahiro.) On 17th of February 1966, he started to study sword making from Miyairi Akihira(The Living National Treasure), 17th of February 1972 he was approved to make swords by Agency for Cultural Affairs, and his first Tachi won a prize for effort at the 8th New Great Swords Exhibition. In 1975 he became independent and after that he won a series of prizes including Excellence Award at New Great Swords Exhibition. In 1990 he won also NBTHK Award and got the order of Goshinto(Katana for God) for 60th transfer of Ise Jingu. In November 2019, he got an order of making Tamahagane mirror from Service Association for the enthronement ceremony of Emperor Reiwa, and successfully dedicated it in Atsuta Jingu.

From Aoi Art:This Tanto is made for an order and so it is done very well. It is imitating old swords but it has the taste of new swords(Shinto). It is in very good condition, still has Ububa, which we can truly recommend for you. Additionally, they need greater determination for making swords on New Year’s days, which means this sword is full of energy of the swordsmith. 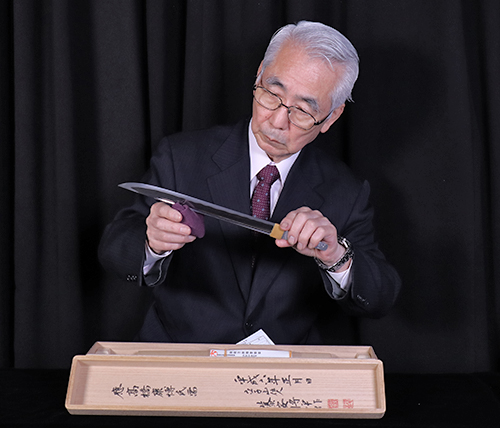