(We divide 4 sections for each sword as Saijyo saku, Jyojyo saku Jyo saku and regular saku)
This sword belongs to Saijyo saku ranking.
The blade was polished.
habaki: Gold. Kamon is engraved. 35g
Blade length:26.2cm or 10.31inches
Sori :0.0cm or 0.0inches
Mekugi:1
Width at the hamachi:2.71cm or 1.06inches
Kasanei:0.66cm or 0.25inches
The weight of the sword:210grams
Era: The Showa period
Shape: Well-shaped Tanto. Waterfall and Kaen-Fudo are engraved on the front. Goma-Bashi and sanskrit are engraved on the back.
Jigane: Koitamehada is grained well with Jinie. Elaborate.
Hamon: Niedeki-Gunomemidare. Boshi turns back round and becomes Hakikake.

Special feature: Takashi Kinichi(Sadatsugu) is a swordsmith from Ehime prefecture, who was approved as Living National Treasure. He made a lot of works for shrines or imperial family. He won Prime Minister Prize in 1938 at the 1st Sword Exhibition(Token Hakurankai). Later it was forbidden to make any swords, but Tsuruta had experienced an interesting sword of him. At the time of Japan-Korea war, Japanese government gave him a special permission and had him make a Tanto for a general in U.S. army. The blade had beautiful plum and cherry blossoms engraving, and there was Tame-Mei which says he made the sword for the general, and his name was engraved in English. We think the sword must be preserved really carefully now. This work was made in 1952. The blade has great engravings of waterfall, Kaen-Fudo, and sanskrit. The skill of engraving is outstanding. After 3 years from the production of this Tanto, he was approved as Japanese living national treasure. He passed away in 1968 at the age of 66. They say that there are no modern swordsmiths who can make any greater blade-engraving than he made, his engraving is truly impressive. Nakago has gold-inlaid Kao. Matsumoto Katsujiro is probably a person from Japanese Navy.

Background: On the 18th of April, 1952, diplomatic relations were established between Japan and Germany. 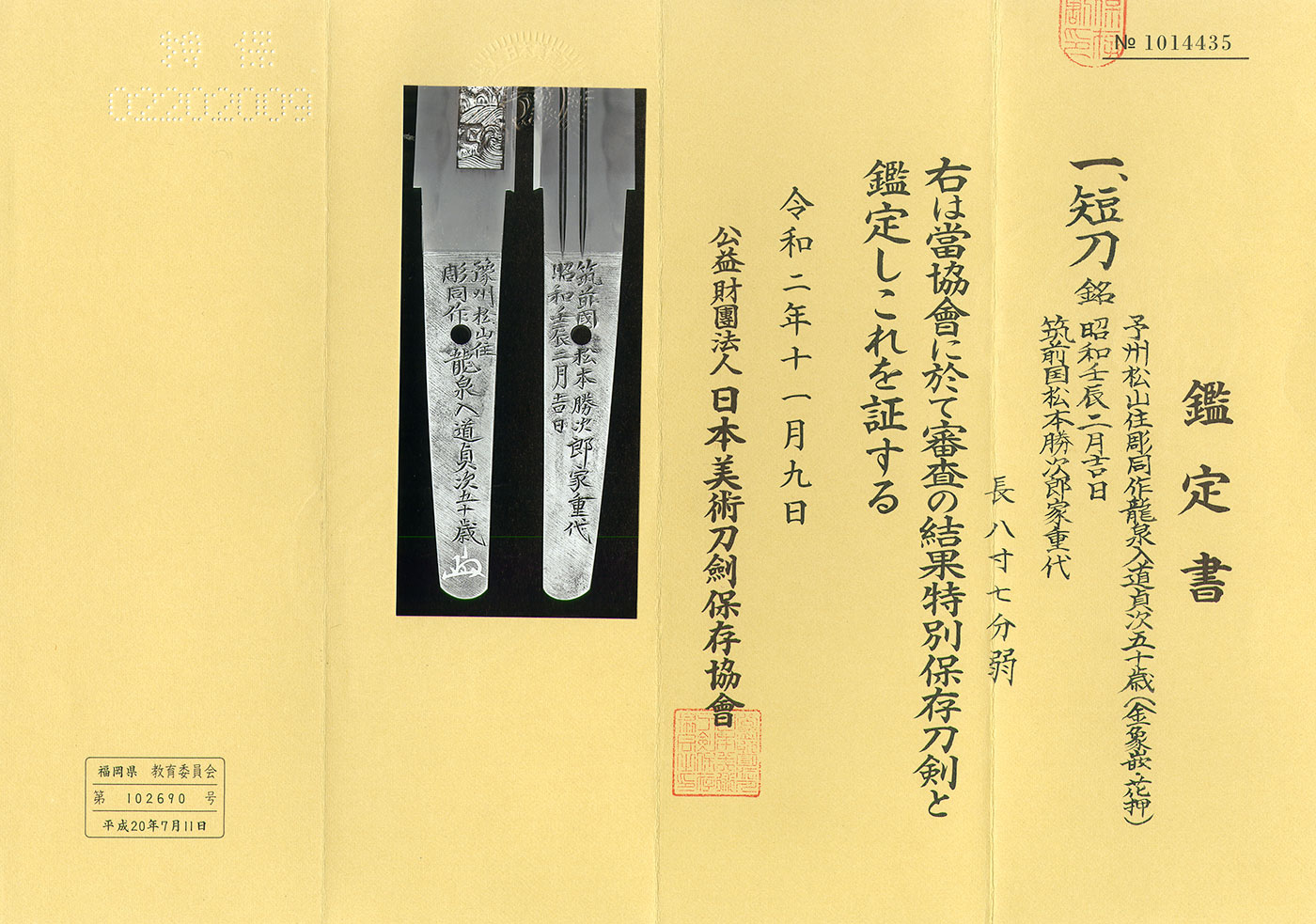