(We divide 4 sections for each sword as Saijyo saku, Jyojyo saku Jyo saku and regular saku)
This sword belongs to Jyo Jyo Saku ranking.
The blade was polished.
Habaki :silver single habaki (typical Gassan Habaki original)
Blade length : 22.8 cm or 8.97 inches.
Sori : 0 cm or 0 inches.
Mekugi :1
Width at the hamachi : 2.0 cm or 0.78 inches.
Kasane : 0.64 cm or 0.25 inches.
Weight of the blade 120 grams
Era : Showa 8 (1933)
Shape : The blade is rather smaller size with thick kasane
and elegant shape. On the front, Bo-Hi is engraved and
on the back side, Goma hashi is engraved elegant beautiful shape.
There are light scratches. It is not serious.
Jigane: Koitame had qute well grained with jinie attach
nice Yamashiro style texture.
Hamon :Niedeki suguha with rather thick
and small ashi work soft habuchi.

Special feature:Gassan Sadakatsu was born as the second son
of the First Gassan Sadakazu in 1869. Sadakatsu was
a representative swordsmith of Taisho to early Showa period.
He was an amazing swordsmith to make all of Soshu-den,
Bizen-den and Yamato-den. Especially his distinctive Ayasugi-hada
inherits the tradition that has been continued
from the Kamakura period still lives on in gendai swordsmiths.
Under his famous father Sadakazu the First, Sadakatsu forged only
a few swords inscribed his swordsmith name until the death
of Sadakazu in the late Taisho era. Gadakatsu put all his energies
into making his own sword after 1920’s as a purveyor
to the Imperial Household, special swords to dedicate the Ise-Jingu shrine,
accepting orders by high dignitaries. He tempered sword with sincere
and faithful attitude in conformity with  Shintoism.
Under that he trained many excellent swordsmiths.
His two most excellent pupils, one was his real son
the Second Gassan Sadakazu and the other was Takahashi Sadatsugu,
were designated as preservers of Important Intangible Cultural Assets,
popularly known as Living National Treasures. Sadakatsu passed
away in 1943, aged 74.

From Aoi Aoi : Gassan Sadakatsu was studied under his father
and mastered many kind of sword style, Soshyu. Bizen. yamato.
Mino, Yamasiro and also Ayasugi den.
He also made swords for his father from late Meiji period
which is called Daisaku and educated many sword blacksmiths.
This Tanto is marvelous nice Jigane which looks like Yamashiro style
and excellent suguha hamon with smal ashi.
I recommend this sword as Yomeiri Tanto and amulet Tanto.
Yomeiri Tanto means that There was a custom in Japanese samurai
that the family handed a small Tanto when the daughter got married
to another family. Her family prayed her safety
and to be happiness and strong determination to be her hasband’s
family’s member and also ready to die anytime
in case of the most severe circumstances happened.

Historical background of age:Germany retires
from the international name on October 14, 1933
Einstein Exiles to the United States on October 17, 1933
October 5 The Imperial Hotel opens in Kamikochi.1933. 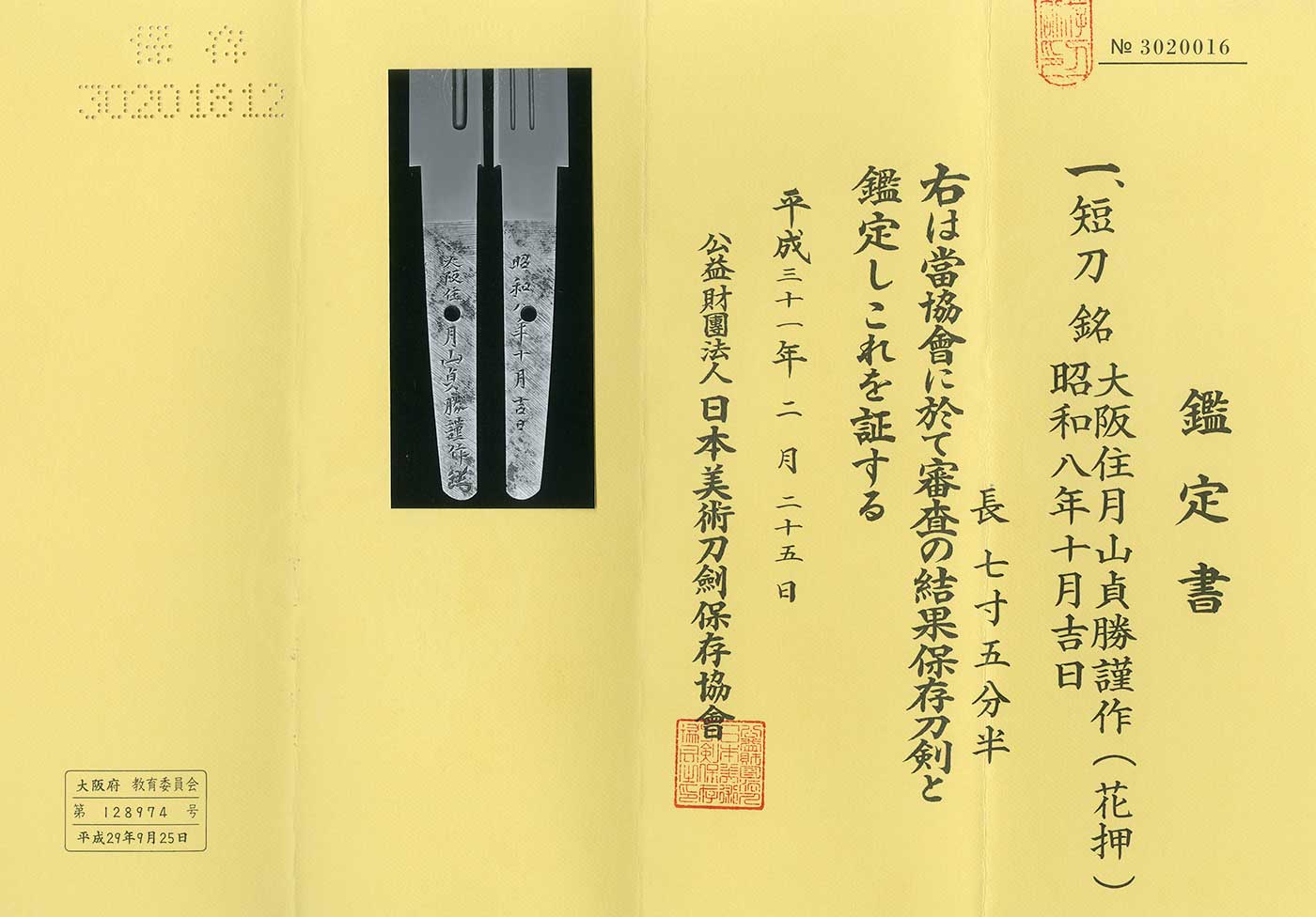