(We divide 4 sections for each sword as Saijyo saku, Jyo-jyo saku, Jyo saku, and regular saku)
This sword belongs to Jyo Jyo saku ranking.
The blade was polished.
Habaki: Gold color single habaki.
Blade length:25.0cm or 9.84inches.
Sori:0.1cm or 0.03inches.
Mekugi:1
Width at the hamachi:2.49cm or 0.98inches.
Kasane:0.56cm or 0.22inches.
The weight of the sword:170grams.
Era: The early Edo period
Shape: Engraving of flag(Hata) and halbard(Hoko) on the front. 2 Bohi and Sanskrit are engraved on the back.
Jigane: Koitamehada is grained well with Jinie. Hadame is blackish.
Hamon: Niedeki Suguha, mixed with Nijuba. Boshi turns back in a small circle.

Special Feature: Yasutsugu the 1st made swords also in Edo and was really popular. It is reasonable to think that it is made by the 1st, before he changed his Mei. In those days, he made a lot of Toshinbori(engraving on the blade), however the engravings of Hata and Hoko are extremely rare.

From Aoi Art: This work was made by Bushu Edo Echizen Yasutsugu, and has engravings on the blade. That blade is blackish and wonderfully made. We truly recommend this one for you. 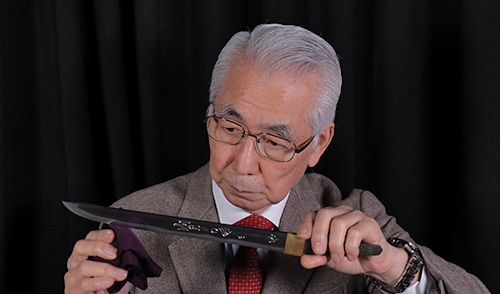