Explanation: Akimori made this Tanto in August 1980.

(We divide 4 sections for each sword as Saijyo saku, Jyo-jyo saku Jyo saku and regular saku)
This sword belongs to Jyo Jyo Saku ranking.
The blade was polished
Habaki : Gold foiled single habaki
Blade length : 29.6 cm or 11.65 inches.
Sori : 0.2 cm or 0.07 inches.
Mekugi : 1
Width at the hamachi : 3.09 cm or 1.21 inches.
Kasane :0.62 cm or 0.24 inches.
The weight of the sword 245 grams.
Era : Showa 55(1980).
Shape : Wide and thick, long Tanto.
There are Bo-Hi on both sides of the blade.
The Ububa is left.
Jigane :Ko Itame Hada well grained with Jinie attach.
The Jigane is beautiful.
Hamon : Nice Deki round shape Gunome Midare with many Ashi.
Boshi is round and pointed shape.

Special feature: Miyagi Akimori, his real name is Miyagi Shinichi.
He was born on December 6th, Taisho 14th.
He studied under Kurihara Hikosaburo.
During the war, he was also active as an Army inscription Tosyo instructor.
He was awarded the Chairman’s Prize at the Army Sword Exhibition.
He has won numerous awards, including a gold medal at the Japanese Sword Exhibition.
After the war, he studied under a living national treasure, Miyairi Yukihira, and learned the making swords.He won the Encouragement Award, the Excellence Award, and the Effort Award.
He has been designated as an intangible cultural asset of Shiraishi City.

From Aoi Art: Akimori (real name is Miyagi Shinichi) was a proud wordsmith of Miyagi prefecture. He passed way on April 2nd, 2018 at the age of 94.
I have seen Akimori’s masterpiece before, and it was a wonderful work with Kinsuji beautifully in the blade.
This blade is reminiscent of a calm Kunihiro.
We higly recommend this Tanto as it is a modern sword that has NBTHK Tokubetsu Hozon.
The Koshirae was made in modern times but the Kozuka and Kogai were made around late Edo period. 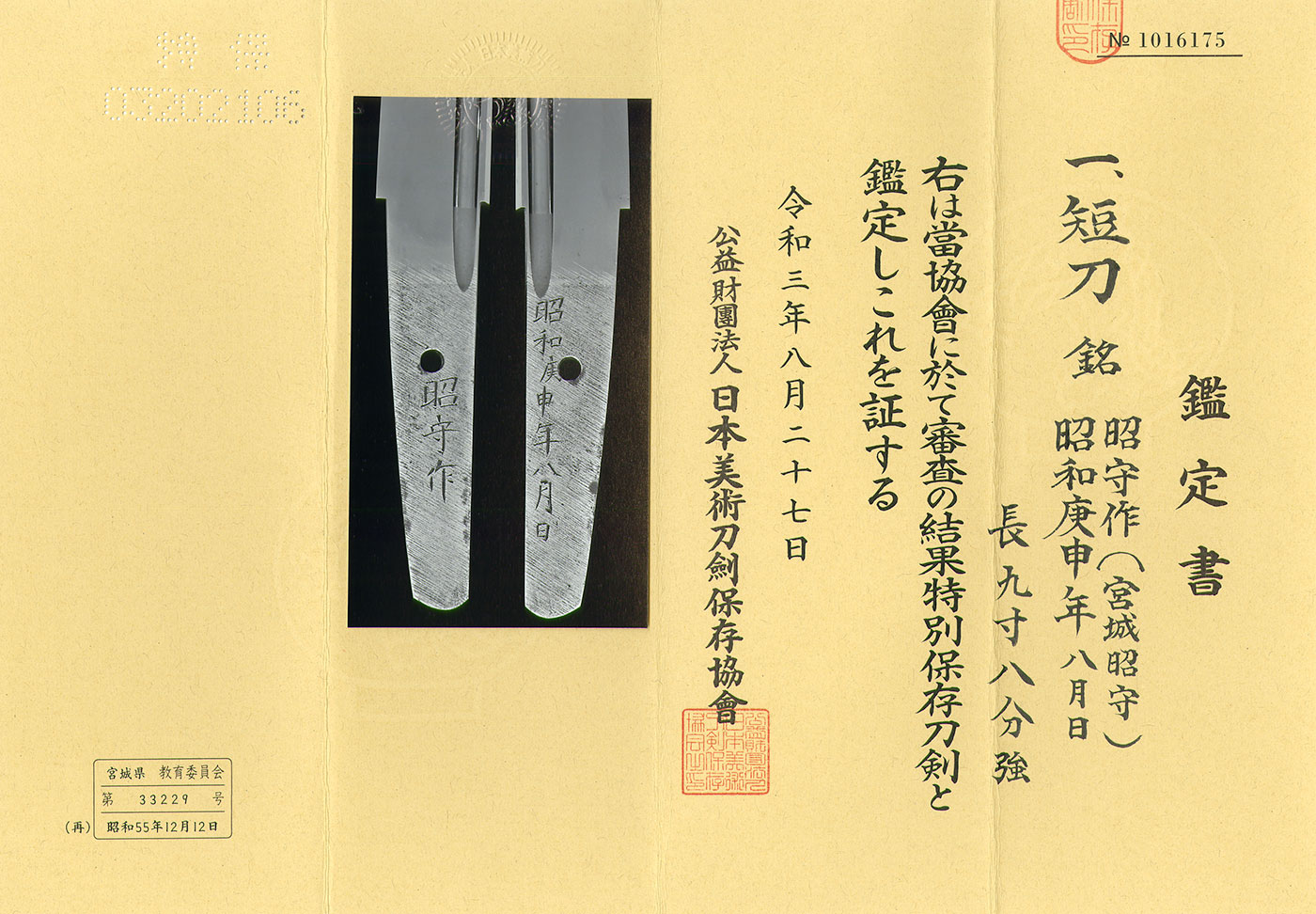