[translation]Made for Shinsaku Meito Exhibition in Showa 62. A trace of Kamakura Bizen Ichimonji Juka-Choji. The blade is incredible. A true masterpiece of Kuniie. It should be preserved politely. Written with great humility on a lucky day in November, Showa 62 by Tadatsugu. (Back) Ontachi Yoshihara Kuniie Saku Hacho 2 Shaku 5 Sun Aru Kore Showa 62 Nen 11 Gatsu Kichijitsu Tosho Kuniieshi (Stamp)
[translation]Tachi made by Yoshihara Kuniie. Blade Length: 2 Shaku 5 Sun. Written on a lucky day in November in Showa 62 by Kuniie.(Stamp)

(We divide 4 sections for each sword as Saijyo saku, Jyo-jyo saku, Jyo saku, and regular
saku)
This sword belongs to Jyo Jyo saku ranking.
The blade was polished.
Habaki: Gold foiled single habaki.
Blade length:75.8cm or 29.84inches.
Sori:3.0 cm or 1.18inches.
Mekugi:1
Width at the hamachi:3.5cm or 1.37inches.
Width at the Kissaki:2.39cm or 0.94inches.
Kasane:0.82cm or 0.32inches.
The weight of the sword:965grams.
Era: Modern times
Shape: The blade is broad and thick with deep Sori. Bohi on the both sides. It has onger
Kissaki and powerful shape. There is 7cm Ububa left.
Jigane: Koitamehada is grained well with Jinie. Beautiful and clean Jigane.
Hamon: Nioideki elaborate Chojimidare and elegant Juka-Choji. Ashi comes in a lot.
Boshi is nearly Ichimai and becomes Midarekomi.

Special Feature: Musashi Ju Kuniie was born in Katsushika in Showa 20, and later he won a lot of awards in Shinsaku Meito Exhibition. His grandfather was famous Kuniie, and he taught him how to make swords. He won Director General of Agency for Cultural Affairs Prize 3times and later Dr. Kunzan Prize and Dr. Kanzan Prize. His elder brother was also famous, Yoshindo, and he made great work as his grandfather, or more than his grandfather. He made swords also overseas and his works are exhibited in American museum, he is popular among the people overseas. We truly recommend this one for you.

From Aoi Art: Hamon has strong characteristics that we can recognize him at one sight. His characteristics are really obvious and easy to distinguish. He is really great enough to realize his characteristics in every sword. Jigane is clean and Hamon is gorgeous: a marvelous work. It is rare to find sword smiths that can forge Tachi of this size beautifully. He was strongly influenced by his grandfather in a good meaning, or we can say that he succeeded the tradition of his grandfather. We truly want you to preserve this masterpiece for a long time. 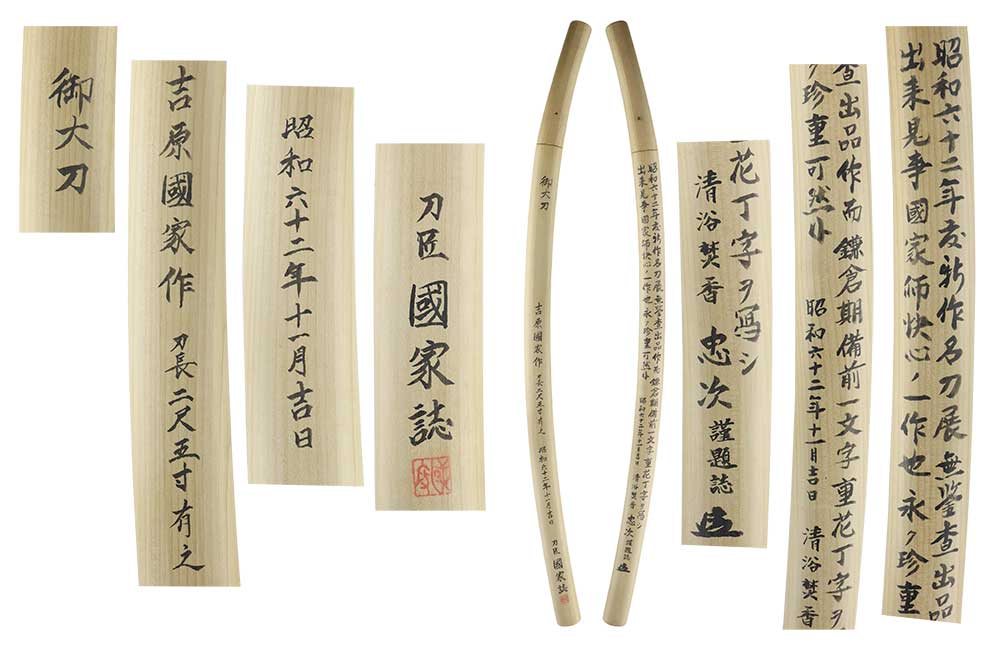