(We divide 4 sections for each sword as Saijyo saku, Jyojyo saku Jyo saku and regular saku)
This sword belongs to ranking.
habaki:gold foiled single habaki.
The blade was polished.
Blade length : 71.2cm or 28.03inches.
Sori :1.4 cm or 0.55inches.
Mekugi : 1
Width at the hamachi : 3.31cm or 1.30inches.
Kasane :0.6 cm or 0.23inches.
The weight of the sword: 710grams
Era: The late Edo period. December of Keio 3.
Shape: Nagamaki shape. The blade is slighly broad with Ububa left, thin, with longer Kissaki: well-shaped.
Jigane: Koitamehada is grained well with Jinie. Beautiful Jigane.
Hamon: Niedeki Gunomemida with lots of Ashi and small Sunagashi particles and Kinsuji. Boshi is Midarekomi and later becomes sharp. It turns back sharply.

Special feature: Kurihara Nobuhide was born in Bunka 12, in Tukigata-village in Nishihara province in Echigo Kuni. He moved to Kyo in Bunsei 12 to be a mirror-smith, but in Kaei 3, he moved to Edo and became a pupil of Kiyomaro. He became independent in Kaei 6 and made swords in Uraga, Sagami Kuni. These works are called “Uraga Uchi”. In Keio 1, he came back to Kyoto and succeeded to Chikuzen Kami, but he stayed in Osaka. He kept on making swords there from October of Keio 1 to the January of Keio 3. Later he came back to Edo and later in summer of Meiji 7, he came back to Echigo Sanjo, and made Sacred Mirror fro Yahiko Shrine in Meiji 8. He passed away on the 25th of January in Meiji 13, in the house of his adopted son, Nobuchika, in Tokyo Hongo Motomachi, at the age of 66. His skill was outstanding among the pupils of Kiyomaro, and he was supposed to be the next Kiyomaro. The reason why he could gain such a great skill in short period with Kiyomaro was perhaps because he experienced many things as a mirror-smith. Kiyomaro never did sword-engraving, but Nobuhide did often. It is said that he made a lot of donation to Kiyomaro to become his pupil. And it is also said that Kiyomaro allowed him to become a pupil because he had understood Kiyomaro’s works really well.

From Aoi Art: The blade is broad and thin, shaped like Naginata, and looks powerful. This style was popular in the late Edo period, and successive possessors must have preserved this very carefully and gently. His other characteristics are: Kitae is rough(Hadadachi), Mokumehada flows in Itamehada, round-headed Gunomemidare mixed with sharp Gunome, sharp Kissaki, mixed with Chojiba with long Ashi ans Sunagashi/Kinsuji in Hachu. It is similar to Samonji school characteristics. It is very rare to see the production date and the name together on the front Nakago. Koshirae is nice and Katana itself reminds us of Nagamaki. We truly recommend this one to you. Furthermore, Kaeshi-Saya accompanies the Koshirae. 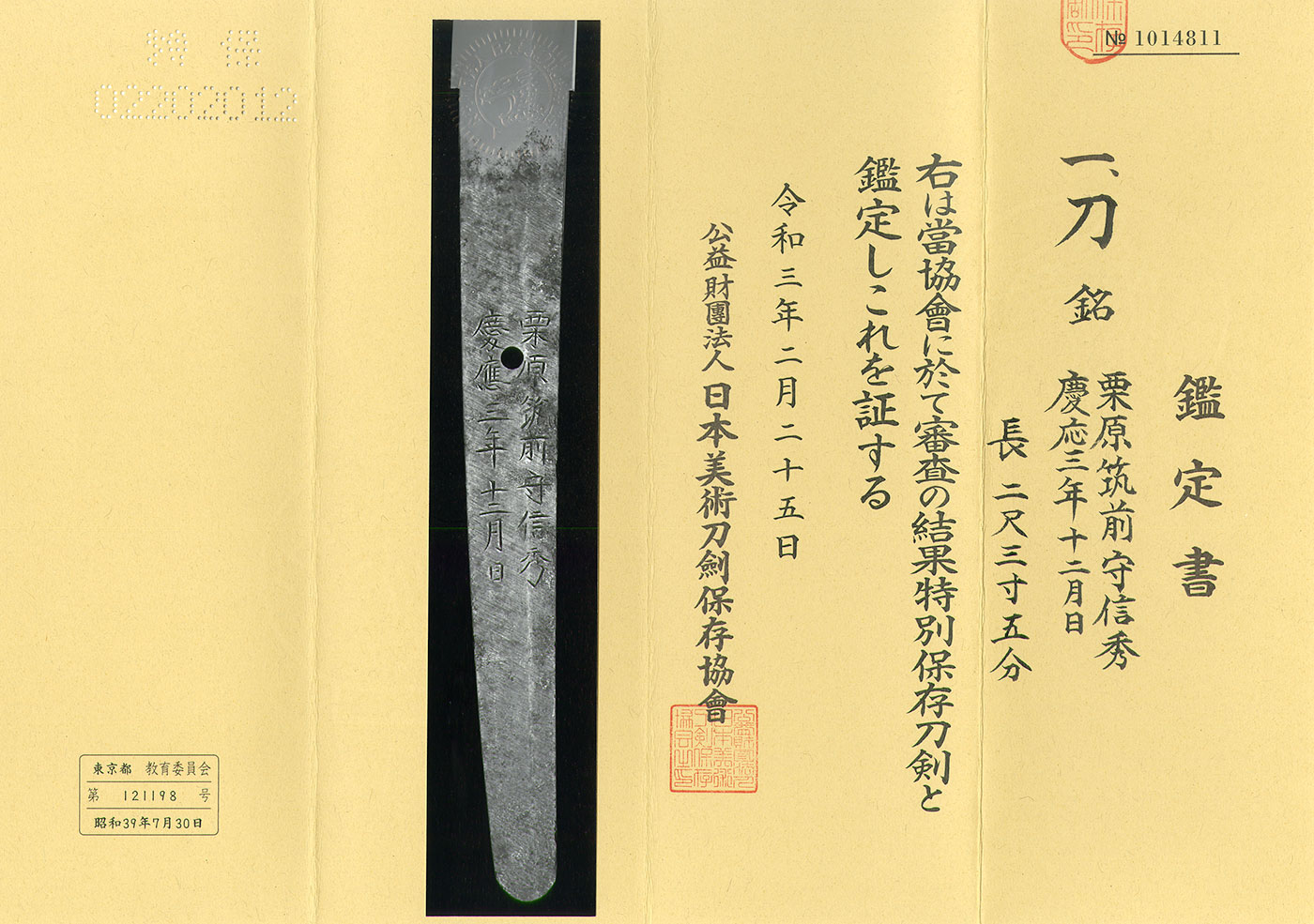