(translation: Kasama Ikkansai made this sword, on a lucky day in February in Taisho 2.)

(We divide 4 sections for each sword as Saijyo saku, Jyojyo saku Jyo saku and regular saku)
This sword belongs to Jyo Saku ranking.
habaki: Gold foiled single Habaki.
The blade was polished.
Blade length : 73.0cm or 28.7inches.
Sori : 1.5cm or 0.59inches.
Mekugi : 1
Width at the hamachi : 2.95cm or 1.16inches.
Width at the Kissaki : 2.09cm or 0.82inches.
Kasane : 0.64cm or 0.25inches.
The weight of the sword 765 grams
Era : In February, Taisho 2.
Shape : Tha blade is broad and thick with adequate Sori and longer Kissaki. The blade has Sanskrit engraving and 2-lined Hi.
Jigane : Koitamehada becomes really fine with Jinie to be beautiful clean Jigane.
Hamon : Niedeki Gunomemidare. Sunagashi and Kinsuji work in Hachu with small pieces. Boshi turns back round.

Special feature: Kasama Ikkansai Shigetsugu’s real name is Kasama Yoshikazu. His uncle is Miyairi Ikkansai Shigetoshi. He was born in 1886 at Shizuoka prefecture. He moved to Tokyo in 1903 and forged swords at the Tokiwamatsu Token Institute in Kasama Toyama house. Later he became the chief sword smith. And he was approved by Kunaisho(Ministry of the Imperial Household), later he became the vice-director of the training sword industrial group in east Japan. Also he taught in Tokyo Akasaka Nihonto Denshujo(training-school), and he won the best rank in the imperial exhibition. He passed away at the age of 80, in 1966. He has contributed to the restoration of traditions. He is one of the best sword smith ever, and his son in law, Tsukamoto Kisho, and Miyairi Shohei(later Ningen Kokuho, living national treasure) are both his pupils. This work is truly wonderful with Ububa left.

From Aoi Art: It is longer than usual Shigetsugu works, 73.0cm long, and it isn’t supposed to be made in wartime. He was also good at engraving, and these 2 lined Hi and Sanskrit have outstanding quality. Hamon and Kinsuji work really actively: well-made. Gunomemidare becomes stronger from Hamachi, and after that it becomes calmer atmosphere. 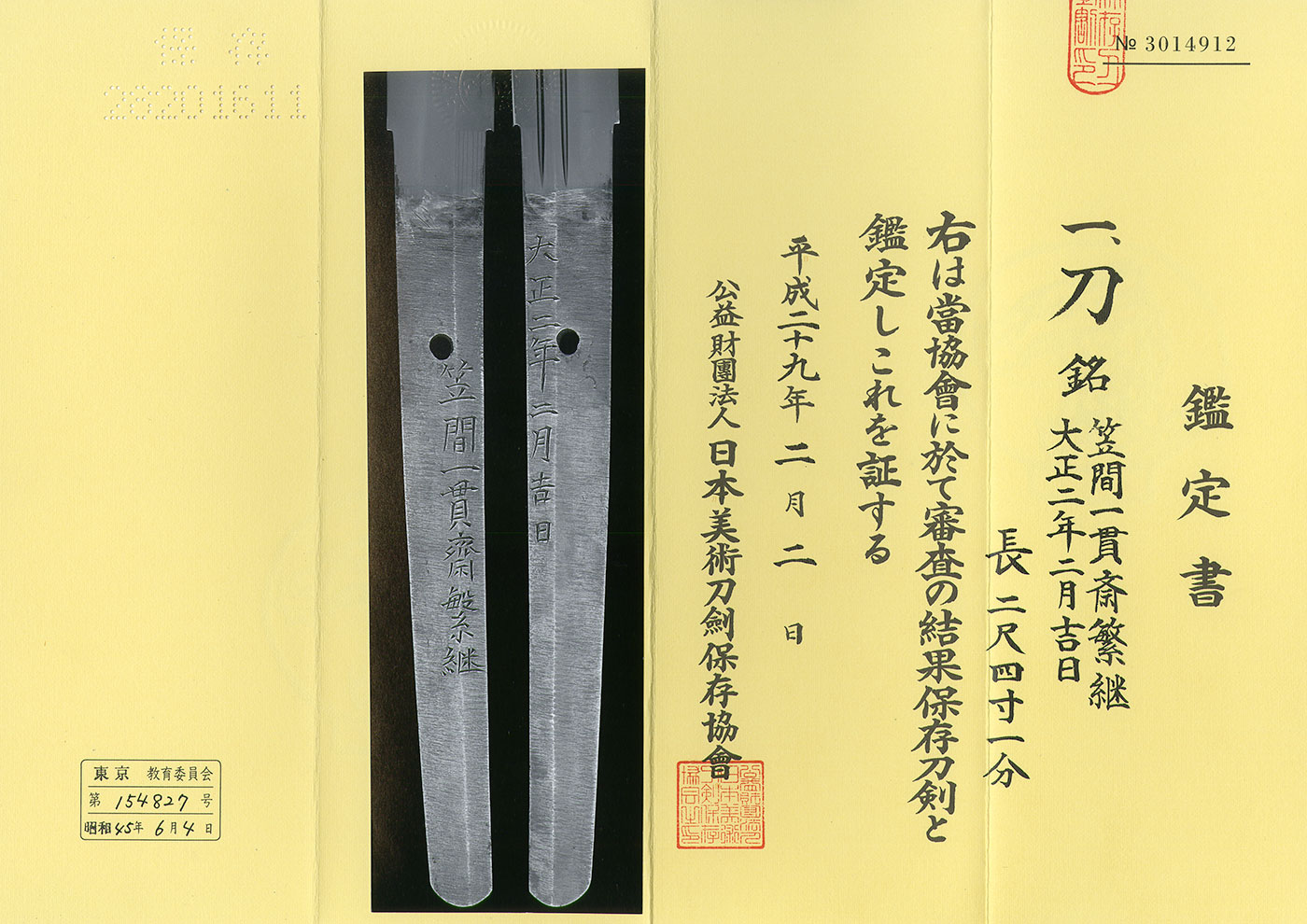