Shinto: Jyo jyo saku: Oowazamono: Hizen
(We divide 4 sections for each sword as Saijyo saku, Jyojyo saku Jyo saku and regular saku)
This sword belongs to Saijyo saku ranking.
habaki: Gold foiled single habaki.
The blade was polished.
Blade length:75.76cm or 29.82inches.
Sori:1.545cm or 0.60inches.
Mekugi:2
Width at the hamachi:3.16cm or 1.24inches.
Width at the Kissaki:2.13cm or 0.83inches.
Kasane:0.75cm or 0.29inches.
The weight of the sword:845grams
Era: In August of Kanei 16, the Edo period. 1640.
Shape: The blade is long, broad and slightly thick with adequate Sori and slightly longer Kissaki.
Jigane: Koitamehada is dense to be Konukahada; Hizenhada.
Hamon: Niedeki Suguha with active Koashi in a smoky atmosphere. Deep Nioikuchi. The masterpiece of Tadahiro the 2nd. Boshi turns back round and becomes Hakikake at the tip.

special feature: Oumi Daijyo Fujiwara Tadahiro was a son of the first generation Tadayoshi and studied the technique from his father. After his father passed away he succeeded to 2nd generation. Tadayoshi 1st had a lot of pupils and after the second had succeeded the family, many pupils helped him a lot and secured his prosperity. He succeeded to Oumi Daijo in July of Kanei 18 and he kept on making swords for 60 years. Tadahiro produced numerous swords, but among them, 2nd is really popular. He passed away at the age of 81, in Genroku 6. Mutsu Daijo Tadayoshi 3rd, Harima Daijo Tadakuni, Kawachi Daijo Masahiro, and Dewa Kami Yukihiro…There were lots of great pupils from his school. And he also got supported by Nabeshima Domain and monopolized hollandaise iron, he made unique Jigane and he allowed its production only within his family.

From Aoi Art: He made this sword 2 years before he succeeded to the 2nd generation, and he was already this good in those days. Many of his works made in these periods passed NBTHK Juyo Token. This work has beautiful Jigane and very active functions of Hamon. What made Hizento very famous is Konukahada, the Hizen Jigane. They produced iron under the monitor by Nabeshima Domain, and protected its superiority during generations. It is a miracle that we have this sword now. The blade is long enough and Jigane is beautifully grained to be Hizen Jigane. Hamon has ddep Nioikuchi and active functioning. We truly recommend this to you. 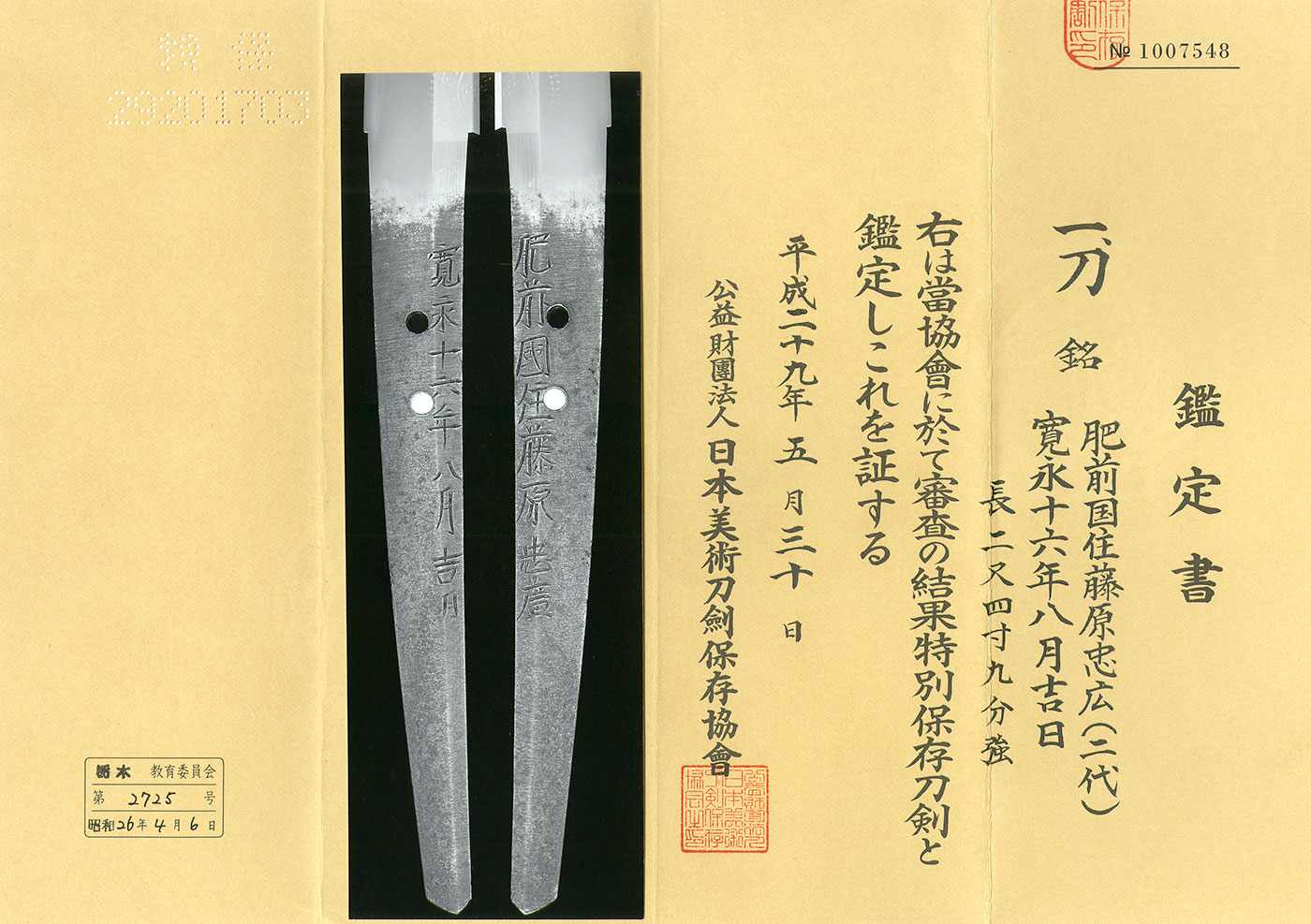