(We divide 4 sections for each sword as Saijyo saku, Jyo-jyo saku Jyo saku and regular saku)
This sword belongs to Saijo Saku ranking.
The blade was polished.
Habaki : Gold foiled single habaki.
Blade length :69.8cm or 27.48 inches.
Sori :1.0cm or 0.39 inches.
Mekugi : 1
Width at the hamachi :3.05cm or 1.20 inches.
Width at the Kissaki :2.45cm or 0.96 inches.
Kasane :0.74cm or 0.29 inches.
The weight of the sword:915grams.
Era : The Meiji 2. (1872)
Shape : The blade is broad and thick with adequate Sori and larger Kissaki.
Jigane : Koitamehada gets close together with lots of Jinie. Beautiful Jigane.
Shinogiji: Koniedeki, frequent Chojimidare appears in the both sides gorgeously.
Hamon: Chojimidare gets more gorgeous and gorgeous. Ashi works well. Boshi is Midarekomi.

Special feature: Koyama Munetsugu was born in Oushu Shirakawa, in Kyowa 3.(1803) His real name is Sobei, and was called also as Issensai or Seiryosai. He had 2 elder brothers: Munehira and Munetoshi. They say that his master was Kato Tsunahide, but his style had been extremely influenced by Kato Tsunatoshi. Originally he was an employed smith at Shirakawa Matsudaira family, but after the Domain moved to Seishu Kuwana, he moved to Edo and made swords as Kuwana Domain sword smith. It is thought that he originally moved to Azabu Nagasaka, and later Yotsuya Samoncho. He succeeded to Bizensuke in Koka 2. (1846) His production started in the late Bunsei(around 1825) and ends in the first year of the Meiji period.(1868) He is supposed to have made tremendous swords in his long production period. He used to break works which he wasn’t satisfied with the quality, that’s why when we meet his works, they are always really great ones. It is a true luck that we have this work, we truly recommend this one for you.

Background of era 1: The Haito Edict was issued in the Meiji 4. Many swordsmiths lost their jobs.

Background of era 2: In the first year of Bunkyu (1862), the government sent a delegation to Europe as the First Japanese Embassy to Europe. The regular ambassador was Takeuchi Yasunori, the deputy ambassador was Matsudaira Yasunao, Mitsuke was Kyogoku Takaro, and Shibata Takenaka and Fukuchi Genichiro as others. It is said that Yukichi Fukuzawa and others joined and the total member were 36 people. There joined Einosuke Moriyama and Tokuzo Fuchibe joined as interpreters. 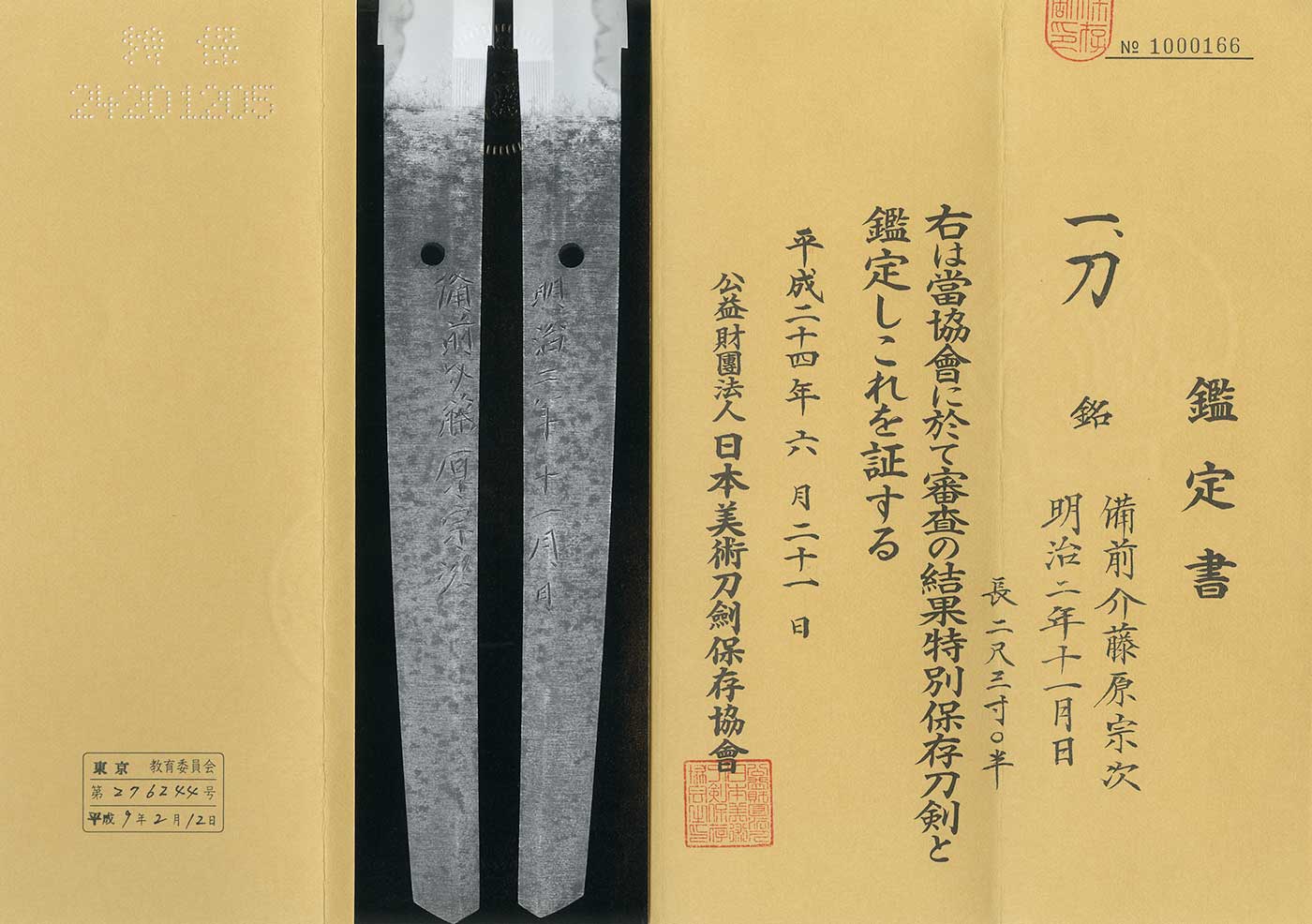