Special feature: Munehiro, usually called Sokan (reading characters with it’s Chinese-
derived pronunciation) born in 1818 as a son of samurai who served the domain of Shirakawa
in Oshu province, learned under Koyama Munetsugu from the same province who
served the Matsudaira family. By the recommendation of Munetsugu, Sokan served the
domain of Furukawa in Shimousa province, present Ibaraki pref. since 1848. Sokan
forged the sword influenced by Munetsugu on early works. Later he created a regular ko-
Gunome with tight nioi-kuchi, extending long ashi to the edge. His personality also comes
out strongly on the conscientiously filed tang and the form of characters orderly inscribed
on the tang. After the Meiji Government administered a law to forbid wearing the sword
in 1876, he found a way out to make scissors. Especially pruning shears have an
excellent reputation still now. Sokan passed away in 1883, aged 64 to 65.

Koshirae : Mobarashi So-ten Kodo-gu.
Saya: black roar Saya.
Tsuba: Obal shape iron tsuba, samurai and playing Ago and landscape are engraved
with gold color.
Menuki: On the shakudo plate, a tiger is engraved with gold color.
Fuchikashira: On the iron plate, samurai are engraved with gold color.
Fron Aoi Bijyutsu: Tairyusai So-Kan , who has a unique way of cutting inscriptions, learns
the swordsmith training technique of Koyama Munetsugu who is a samurai and is the
owner of the Furukawa domain and produces the same clear jigane as his master. So-

kanis also good at sword carving, and there are many works in which the reflections
appear clearly in the production of small eyes and small heads. It is thought that the
reason for this is that he initially produced works with mutual eyesight similar to his
master, but later, there were many works with small mutual eyesight, and he
emphasized sharpness. This work is a work that reminds us of an upside-down choji Midare
hamon, that is, Aoe’s upside-down Cho-ji midare. The brim, rim head, eye-catching, etc.
are unified with Kenmaki Ryu sect-style works and are quite well made. This is a
work I would definitely recommend. 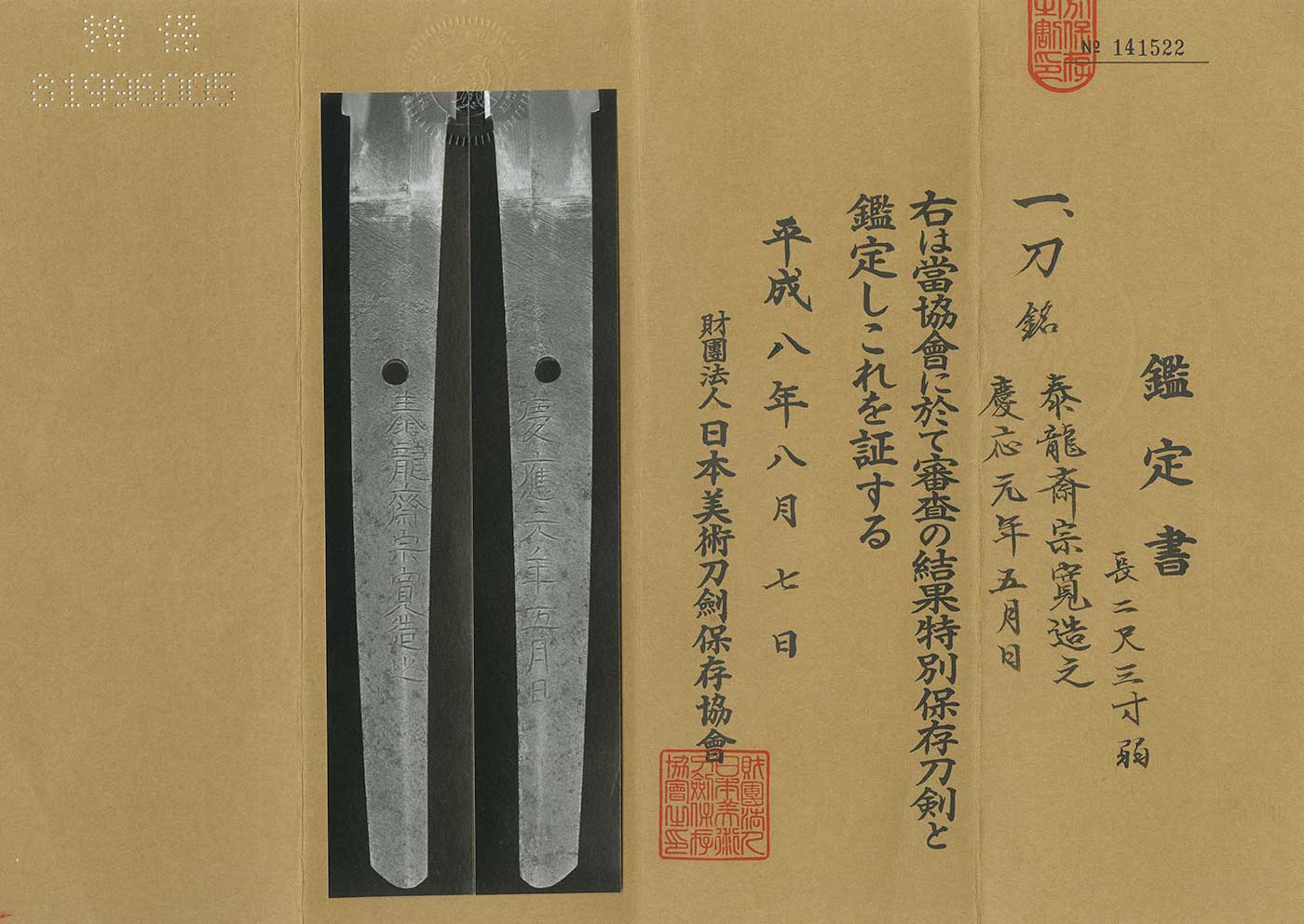