Sayagaki: written by Mr.Tanobe
NBTHK the 47th Juyo Token, Echizen Koku Yamashiro Kami Fujiwara Kunikiyo
On the Sashiura side, there are 7 Kanji characters.There is Kikumon Ichi.
Although there is a theory that adding “Ichi” is a second-generation work,
It’s hard to tell the difference between one and the other, and there’s room for further research.
Ko Itame Hada and Mokume Hada with Jinie attach.
The Jigane is blackish. The Hamon is Chu Suguha. This is serious work.The Nioi is thick. The Nie is strong.
Vibrant excellent sword.
Blade length: 2 Shaku 3 Sun 5 Bu. Reiwa Mizunoto Tora, winter.

(We divide 4 sections for each sword as Saijyo saku, Jyojyo saku Jyo saku and regular saku)
This sword belongs to Saijyo saku ranking.
habaki: Gold foiled double Habaki
The blade was polished.
Blade length : 71.364cm or 28.09inches.
Sori : 1.364cm or 0.53inches.
Mekugi : 1
Width at the hamachi:3.2 cm or 1.25inches.
Width at the Kissaki: 2.14cm or 0.84inches.
Kasane : 0.67cm or 0.26inches.
The weight of the sword: 735grams
Era : The Kanei era, the Edo period
Shape: The blade is normally broad and thick with deep Sori and longer Kissaki. Well-shaped.
Jigane : Koitamehada and Mokumehada are really dense. Hadame is blackish. Beautiful Jigane.
Hamon: Niedeki Futo(thick)-Suguha. Nijuba comes in and Koashi comes in. Bright and marvelous Hamon.

Special feature: We have generations of Yamashiro Kuni Kunikiyo, and the 1st is said to be the most skilled swordsmith among them, and the 2nd is said to be second-most skilled. They say that the 1st was from Matsumoto, Shinshu, and the son of the 3rd Sukemune. He was called “Yoshiuemon” and after he moved to Kyoto, he became a pupil at Horikawa Kunihiro and named himself as Kunikiyo. Later he served Matsudaira Tadamasa in Echigo Takada. And when his master moved to Echizen Fukui, he followed him and moved there, too. In February of Kanei 4, he was approved as Yamashiro Daijo, and in February next year, he became Yamashiro Kami. The 2nd was his second son and called Shibei. This work has “Ichi” right after Kikumon. Generally, works by the 1st have no “Ichi” after Kikumon, but ones by later generations including the 2nd have it. Moreover, we have a Tanto by the 2ndwhich has Mei of “Kikumon Ichi Yamashi Kami Kunikiyo/(back)Tenna 2 Nen 8 Gatsu Hi”, and this Mei is very similar to the one of this sword. That means, it is really probable that this one should be a work by the 2nd, but it is really difficult to judge which Kunikiyo by the evidences that we have now, so what we can do is only wait for new researches.

From Aoi Art: This Katana has Chu-Suguha and Futo-Suguha with Koashi and Yo on upper part, deep Nioi, and partial rough Nie is mixed into everywhere. Kuichigaiba appears. Sunagashi and Kinsuji come in. Nioikuchi starts to sink down. Marvelously-made. This sword has especially deep Nioikuchi and lots of functions in Hachu among all of his works. Kitae is Itame mixed with Mokume with lots of functions. Hadame is visible with thick layers of Jinie. It has some characteristics of old swords like blackish Jigane, and shows nice aspects of old swords. It has to be the best masterpiece that shows his greatest effort and skill. The blade is in really healthy condition and the shape is powerful and solid, we truly recommend this one to you. 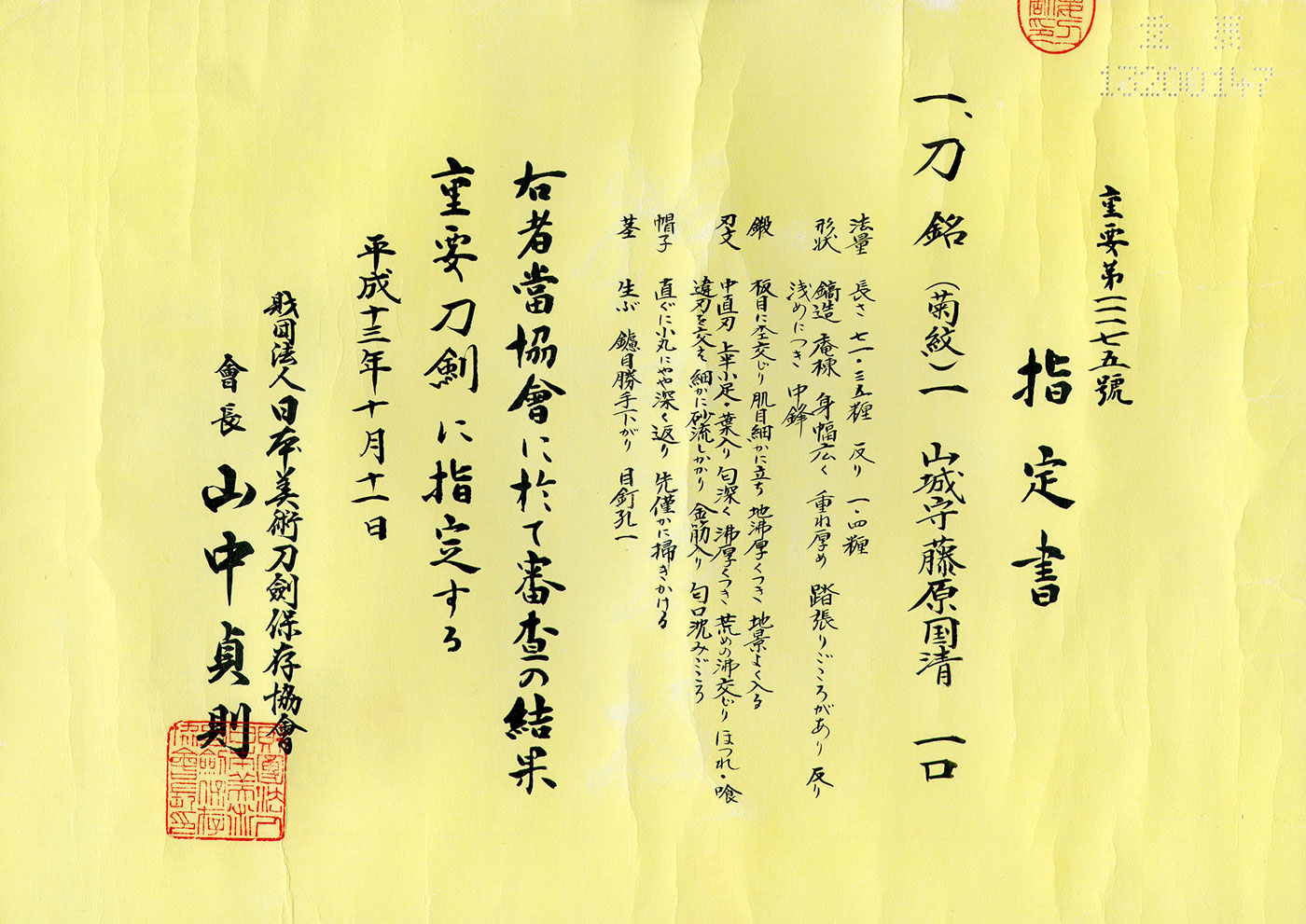 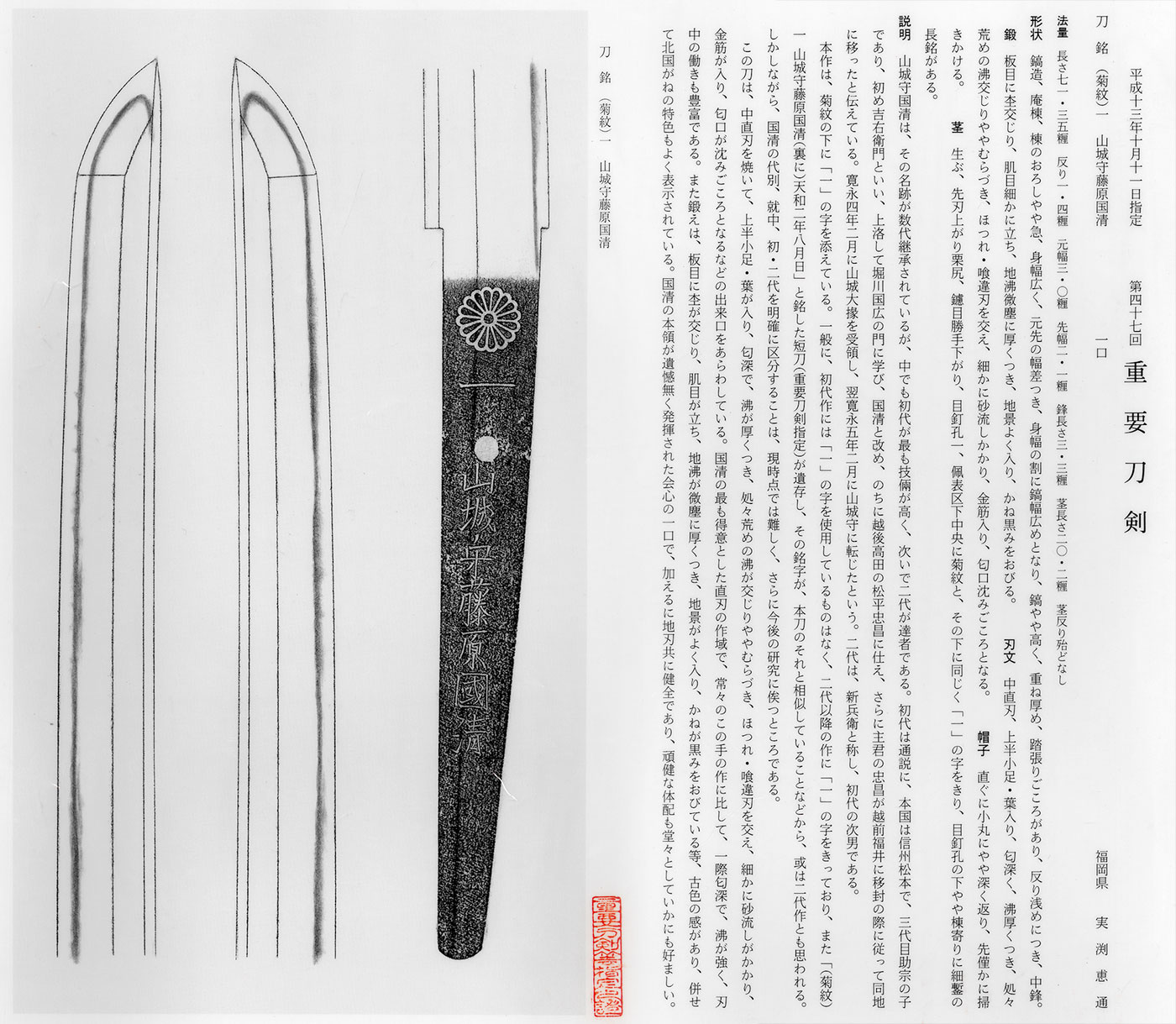 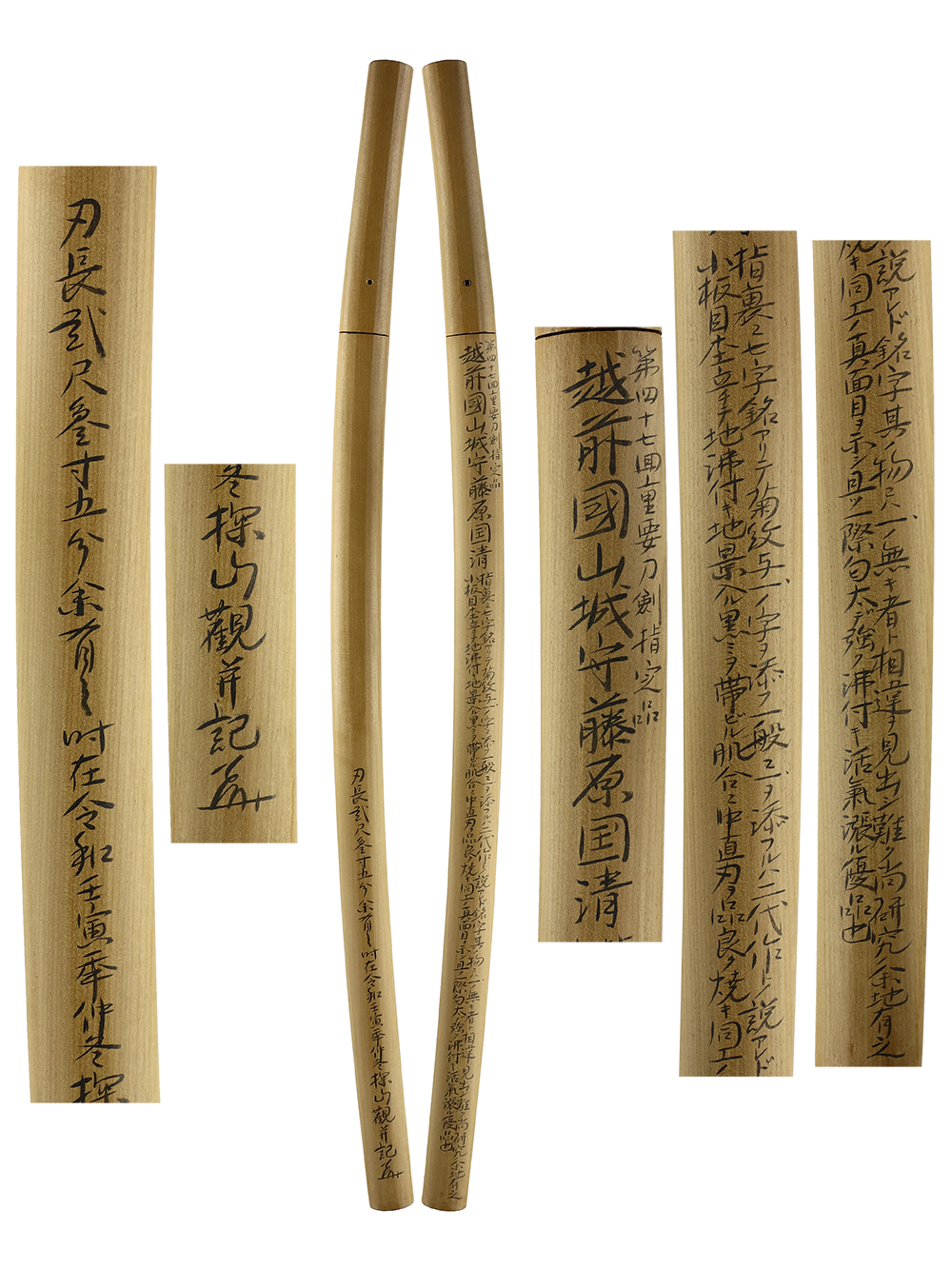