*Explanation : Kasama Ikkansai Shigetsugu made this sword at factory in mantion of Toyama Mitsuru (the right wing politician) at 1938, February lucky day.
The holy name of gods Hachiman Daibosatsu and Kasuga Daimyo-jin on the tang by his student later on at August 1938, lucky day.

(We divide 4 sections for each sword as Saijo saku, Jojo saku, Jo saku and regular saku)
This sword belongs to Jojo saku ranking.

Sayagaki done by Gosanzo mentioned as following.
‘The blade was forged at the mantion of Toyama Mitsuru. Horimono engrave by his student Sakai Ikkansai Shigemasa. The engraving is nice and quite precios sword the length is 29.8 inches long size’

The blade is polished by high ranking polisher.
Habaki : Gold wrapped single Habaki.
Blade length : 75.7 cm or 29.8 inches.
Sori : 1.9 cm or 0.75 inches.
Mekugi : 1
Width at the Hamachi : 3.59 cm or 1.4 inches.
Width at the Kissaki : 2.96 cm or 1.17 inches.
Kasane :0.65 cm or 0.27 inches.
Era : 1938 (Showa period during WW2)
Shape : The blade is very wide and thick with deep curve and long Kissaki gorgeous style. And the holy name of the gods ‘Kasuga Dai Myo-jin’ and ‘Hachiman Daibosatsu’ are engraved on each sides of the blade.
Jigane : Koitame-hada well grained with Jinie attach and also small Chikei work.
Hamon : Niedeki Chouji midare with Ashi scatter. Sunagashi and Kinsuji work active in Hamon.

Special feature : Ikkansai Shigetsugu was born in 1886 at Shizuoka prefecture as a nephew of Miyairi Ikkansai Shigetoshi who was also a swordsmith. Shigetsugu learned under his uncle and Morioka Masayoshi. Shigetsugu went to Tokyo in 1903 and entered to the Tokiwa-Matsu Token Kenkyu-sho the Toyama house. Shigetsugu became a chief swordsmith and made several special swords to present. He spend his life to revive and passing the traditional method of tempering Japanese sword tu future.
Shigetsugu passed away in 1966, aged 80.
Miyairi Akihira and Tsukamoto Okimasa were his famous excellent students. Miyairi Akihira became a preserver of Important Intangible Cultural Assets, popularly known as Living National Treasures. Tsukamoto Okimasa became Shigetsugu’s son-in-law but died while still young.
According to the inscription on the tang, The blade was made at Toyama Mitsuru who was right wing politician.
And also the blade was engraved by Sakai Ikkansai Shigemasa who was a student of Ikkansai Shigetsugu at Showa 49th August lucky day.
It is quite unusual sword. This sword is a copy of the Kanemitsu who was working at Nanbokucho period Bizen top ranking sword maker. The blade is extremely wide and long and also deep curve long Kissaki gorgeous style.

Historival back ground : The Nazis merges Austria on March 13, 1938.

(*In order to make a payment to consignor from us immediately after the item has been sold, we cannot accept cancellation on items indicated as ‘consignment sale’ for any reason. Thank you for your understanding and for your cooperation.)
（为了在物品售出后立即付款给我们的发货人，我们不能接受付款延迟，分期付款，或取消订购任何因为任何原因表示为“寄售销售”的项目。） 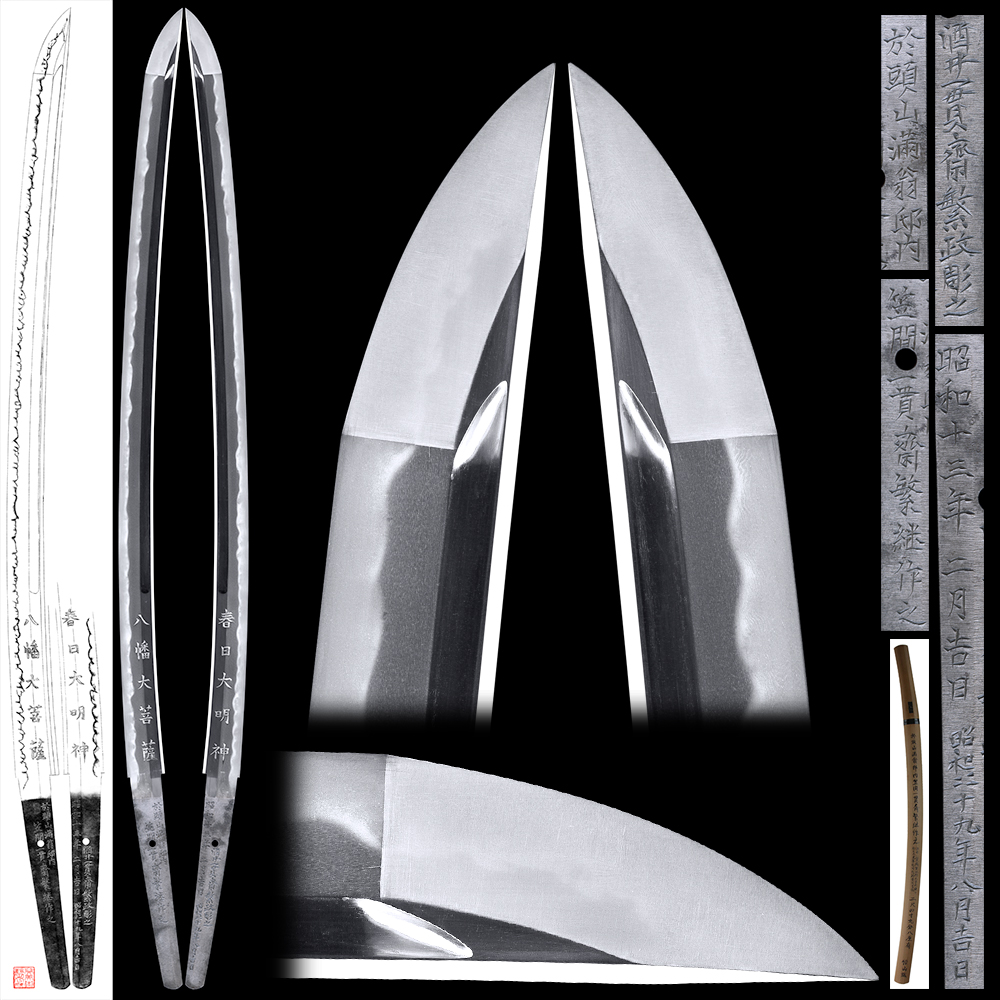 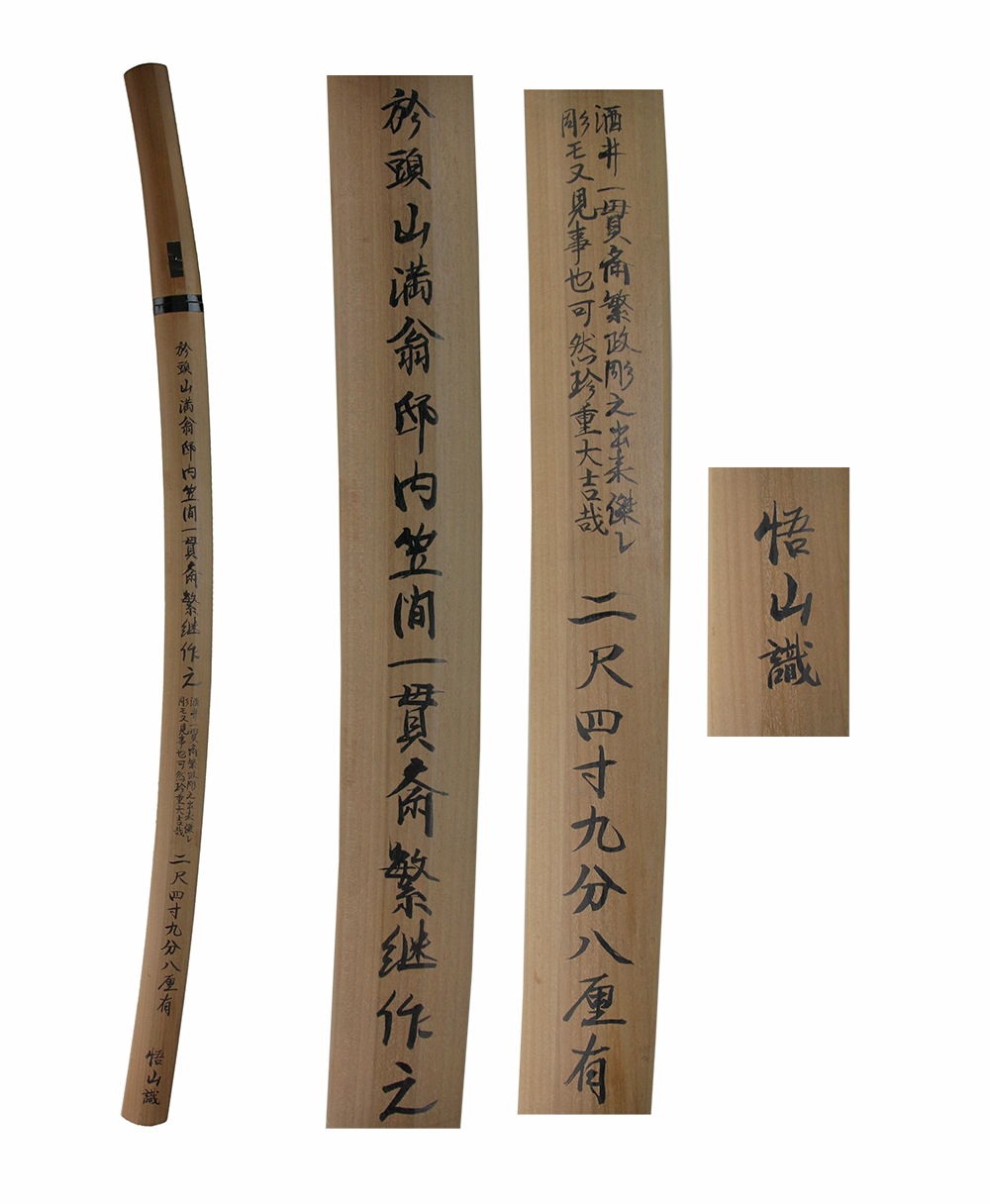