Special feature:Recently sizable swords made before the end of the Second World War appeared by chance.
Hokke Saburo Nobufusa made them during wartime. He passed away before cutting the signature
and unfinished swords were left untouched after his death. The Hokke family kept them
in Miyagi pref. Hokke Saburo Nobufusa who made this sword worked in prewar days
and during the war. He learned at Ichiryusai Sadatoshi
and went under the name of Ryoun.
Nobufusa’s son and grandson succeeded to the swordsmith name Nobufusa.
The present Nobufusa also participates actively making highly–motivated swords.
He was designated an intangible cultural assets of Miyagi pref.
He is good at making traditional Masame-hada of the Yamato School called Hosho-utsushi.
The Nobuhusas are highly admired for generations from the Namboku-cho period until today.

From Aoi Art : The sword is the first generation Hokke Saburo Nobuhusa.
His Hamon pattern is Aoe style sakasa Choji midaire,
and continued to 8 generation Nobufusa.
From 2nd generation, Nobuhusa made Masame hada
and continued this style until now.

From Hokke Saburo Nobufusa: I am first generation Ryun(Hokke Saboro Nobuhusa)
I’d kick to talk from the heaven to you.
My real name is Syohei Takahashi. My sensei(teacher) is Ichiryusai Sadatoshi
who was well known Bizenden style sword maker and also very strict teacher.
I learned a lot and kept his sensei’s technique.
I passed away Syowa 33 Nen 5 Gatsu(1958, May) My favorite Hamon is Aoe style sakasa Cyoji midair hamon.
During the war time, Fukushima city chief ordered to make a sword for present
as the victory prize for horse holder at spring horse race game.
The sword was ordered the blade is wide and thick with deep sori
and longer kissaki special order sword.
So I tried to make my best with my Deshi(craft men).
I and my dish were very intense and focused for making a sword,
I remember the scene even right now that many visitors were watching the scene handed over
the sword to the victory of the spring horse racing game.
During war time I made a lot of swords but this sword is a special .
I hoe the owner of my sword will keep in good condition for a long period. 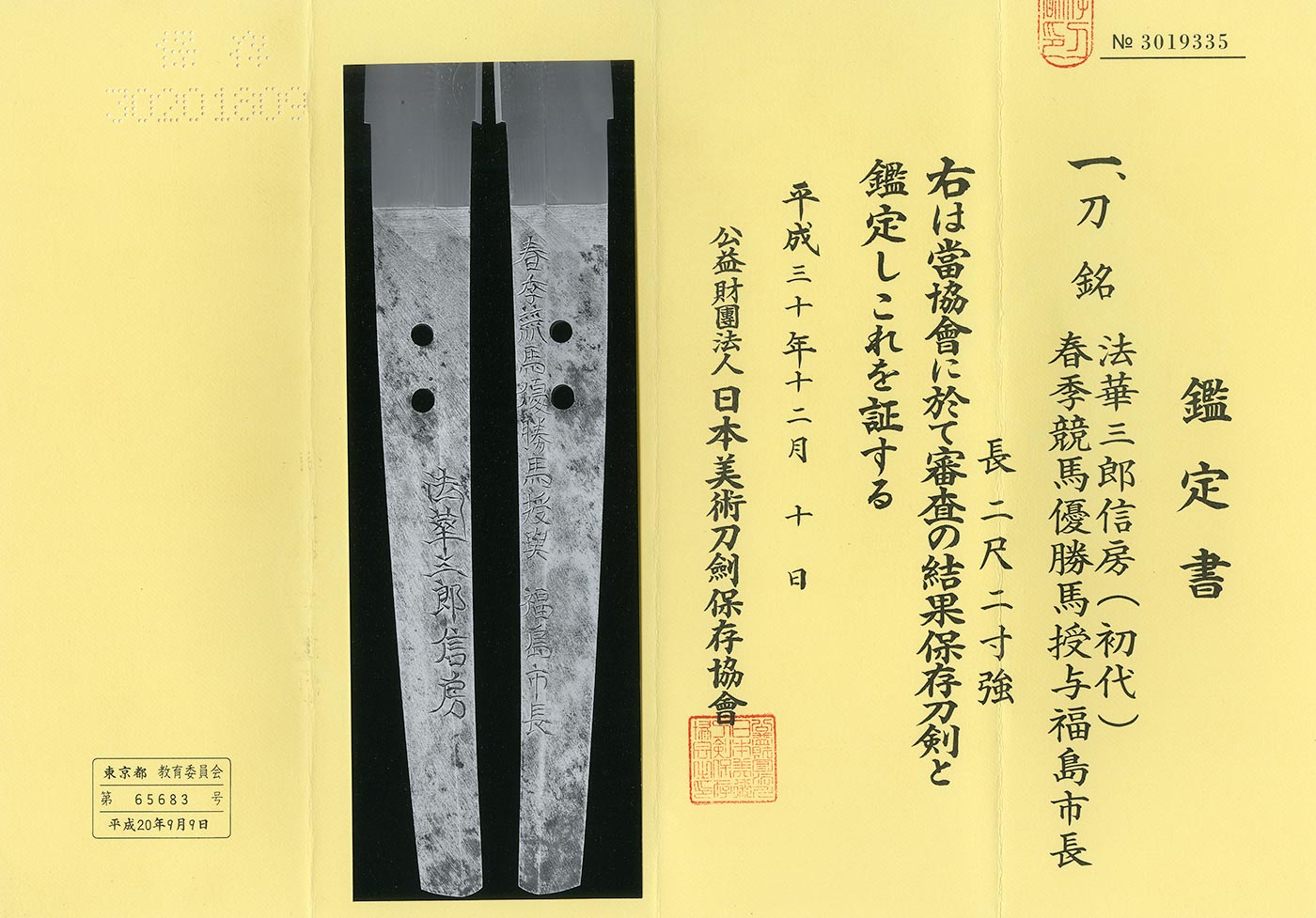