Habaki: Gold foiled single habaki.
Blade length:70.8cm or 27.87inches.
Sori:1.8cm or 0.70inches.
Mekugi:3
Width at the hamachi:3.00cm or 1.18inches.
Width at the Kissaki:2.09cm or 0.82inches.
Kasane:2.67cm or 1.05inches.
The weight of the sword:670grams.
Era: Genroku era in the Edo period
Shape:The blade is slightly wide, thick, Sori is deep, Kissaki is long. Well-shaped piece of art.
Jigane:Koitamehada well-closed, Jinie attached and structs beautiful Konuka-hada, in other words Hizen-jigane.
Hamon:Niedeki, Suguha, at the middle part Kuichigai-ba appears. Boshi is round and turns back.

Special feature:Hizen Koku Oumi Daijo Fujiwara Tadayoshi was a son of Mutsu Kami Tadayoshi, and he is 4th generation Tadayoshi, originally named as Hashimoto Gensuke, later Shinjiro, started inscribing Oumi Daijo in the Genroku 13(1701), died at the age of 80 on the 9th of September in the Enkyo 5(1749). After the death of his father, he ghostmade the sword of his grandfather. He made great works with Suguha and Komaru Boshi like 3rd generation.

Koshirae:
Tsuba:Otafuku shaped iron Tsuba, Sekkamon crest is engraved.
Fuchikashira:Iron plate, patterns painted with gold.
Saya:Kuroishimeji-ish, notched like it was twisted and rolled up.
Menuki:Shishi dogs are engraved and colored with gold.
Kojiri:Iron plate, a dragon is painted by gold.

From Aoi Art:Hizen Koku Oumi Daijo Fujiwara Tadayoshi was a son of Mutsu Kami Tadayoshi, also known as 4th generation of Tadayoshi. He made relatively smaller amount of swords for his age of death, because he was ghostwritten swords for his father and grandfather. In the Genroku era, the demand for the swords was incredibly declining, which would have caused his life economically very harsh, they reckon. This is a Suguha-deki sword, whic was very good at, and its Mei has a strong resemblance to the 2nd generation Oumi Daijo Fujiwara Tadahiro. And the Jigane is very close the Wakizashi by Mutsu Kami Tadayoshi which we Aoi Art own. Kuichigai-ba in Hamon is sometimes found in the works of Mutsu. In either case, this is a truly great sword which we can definitely recommend for you. Koshira is also a great piece that reminds us of Toppei-koshirae. 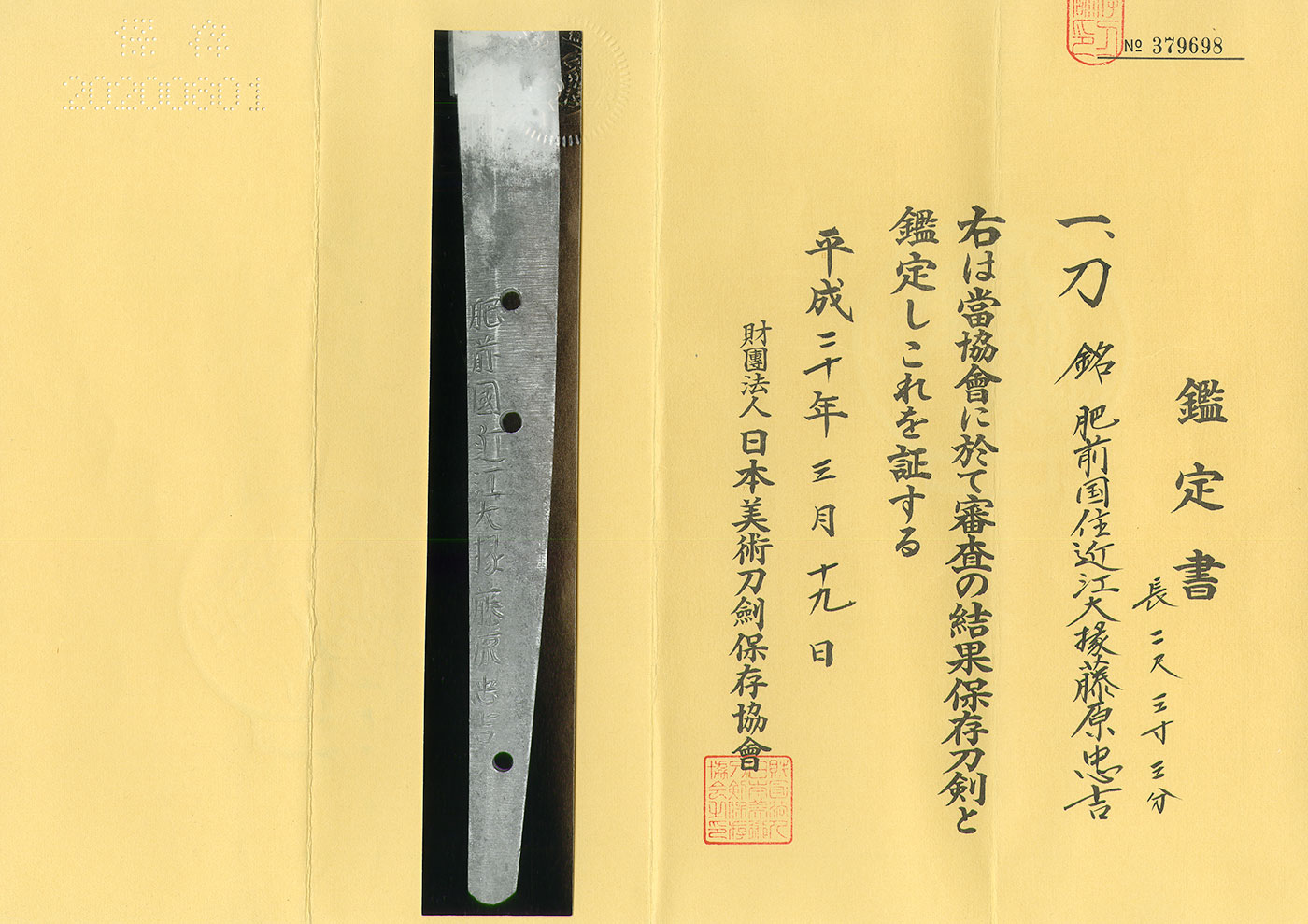 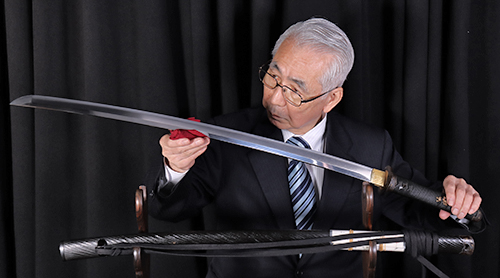