The blade was polished.
Habaki :gold wrapped single habaki.
Blade length : 66.7 cm or inches.
Sori :1.2cm or inches.
Mekugi :  1
Width at the hamachi : 3.23cm or inches.
Width at the Kissaki : 2.52 cm or inches.
Kasane : 0.64cm or inches.
Era : Late Edo period.
Shape : The blade is wide and thick with small sori and long Kissaki nice looking shape.
On both sides of the blade engraved hormone. On the sassi moot, a dragon and Tama which is called Tamaoi ryu and Bo-hi on the dragon and on the sashiura side, Bo-hi is engraved kaki to-shi style.
Jigane :Koitame hada well grained with jinie attach and visible to see the texture.
Hamon : niedeki gunome midair and choji midaire mixed with long ashi almost reach to the edge of the blade.

Special Feature:Chikuzen (No) Kami Nobuhide, known as Kurihara Nobuhide was a famous swordsmith who a pupil of Yama-ura Kiyomaro.
In spite of careful researches, Nobuhide’s career contains obscure periods.
Nobuhide was born in Echigo province, present Niigata pref. in 1815.
He changed from a mirror maker to a swordsmith in middle age.
In this context, he was also good at horimono carving on the blade.
It is said that he forged sword at Osaka from 1864 to1868.
He was a swordsmith of ability. The Emperor Meiji ordered him to forge a special sword to dedicate the Minatogawa Shrine founded in 1869.
The Meiji Government ordered Nobuhide to exhibit traditional Japanese sword a world’s fair in Vienna in 1873.
In our experiences, it is rare that his katana goes on sale.
He lived in his hometown for the rest of his days and passed away in 1880.
One theory holds that he committed suicide in a similar situation of his master Kiyomaro.

From Aoi Art: Tokugawa Syogun Tokugawa Keiki had Kurrihara Nobuhide
even thou shinshinto blade which means the blade was high ranking sword.
I think the neil of the dragon’s Horimono reached inside of the Hamon,
so the Horimono is Ububori (original hhorimono).
At Keio Ganen(first) year August asa sama as This sword,
he made quite same design sword with same engraving.
Probably He mada same swords at the sama age.
Hamon looks like Kiyomaro which contains a lot of sunagashi
and also kinsuji. If the blade will be polished by high ranking polisher,
the blade will be wonderful Jigane and hataraki in hamon.
We strongly recommend this sword for you. 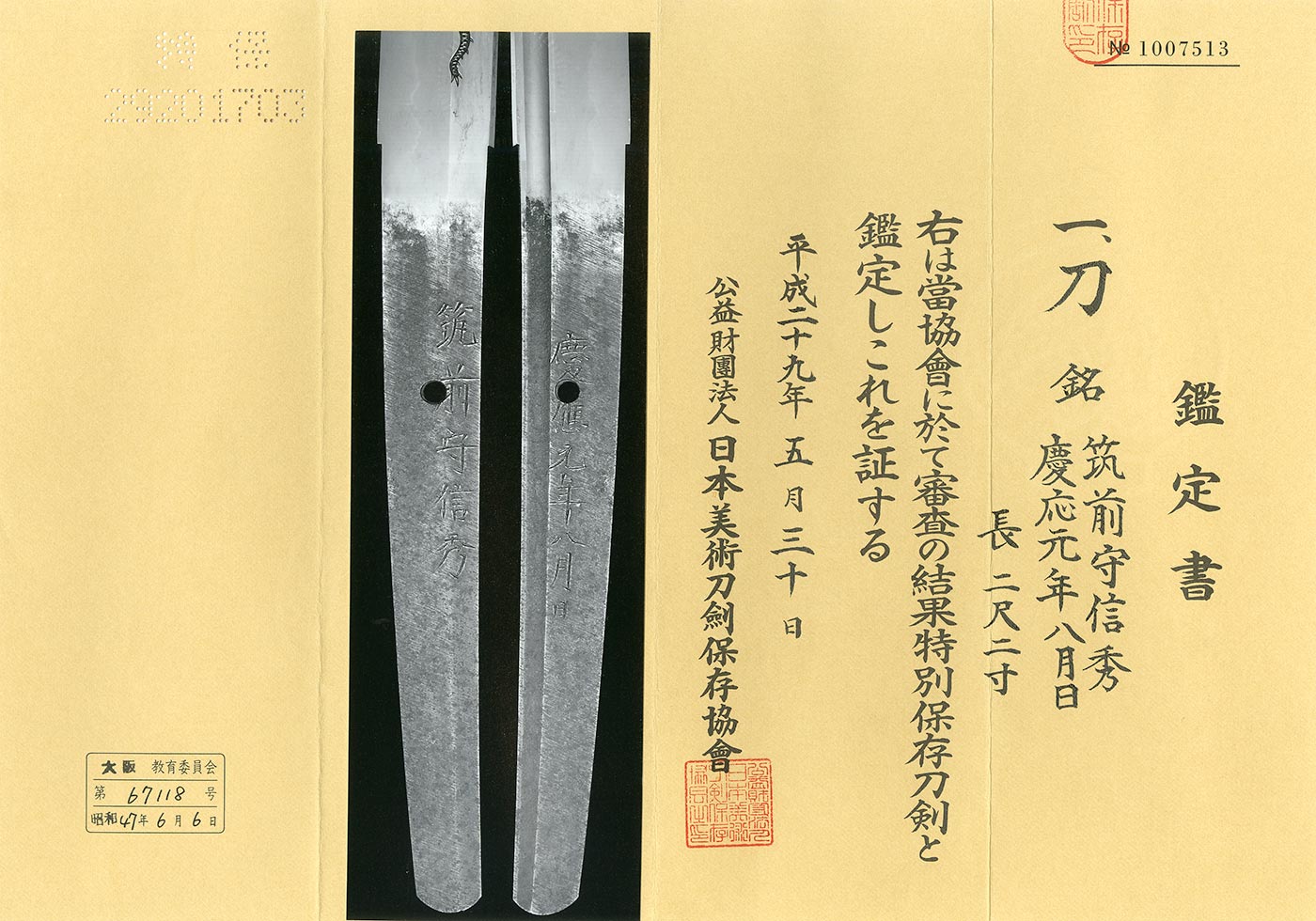