Special feature: Ikkansi Tadatsuna is quite well known sword engraving.
He studied engraving from Fujita Tu-i.
My customer showed his sword with engraving masterpiece.
He studied from him and made many swords with engraving dragon
and other engraving motif.
He out the signature Hori Do-saki on the tang which is hid rule.
2nd generation Ikkansi Tadatsuna a swordsman
from Settsu in the early Edo period. It is a good work with new sword.
Asai iswork and yo also “Mandao” (no work made by Mandao).
“Ikkanshi” is a ., mainly used in the inscription of the work
that has been carved by Kanei and Genroku.
Named the descendant of Awataguchi National Rule of Kyoto,
a swordsmith in the Kamakura period, his father,
Tadatsuna moved to Osaka. The first loyalties received Omikami.
disciple has a long line. Tadatsuna Nidai also receives Omi Kami like his father.
Therefore, the father and son mark “Awataguchi Ouni Komi Tadatsuna”.
Some of the first-generation late-year works are similar to those in the second generation,
and it is thought that the second generation has been added.
The main difference between the first generation and the second generation
is in “Awa” and “tuna”, and “nishi” and “Ito” are different.
In the early days of the second generation, he made a long suguha
that is a style similar to the first generation and worked a suguha hamon blade
of Inoue Shin Kaifu, a deep nioikuchi, and a sculpted Inoue who transformed himself into
Tsuda Echizen Kami Sukehiro from adore him. There are manyHori dosaku
that have not only a traditional sword-wound dragon, but also dense carvings
that make you feel the flower of the martial arts,
such as waterfall a plum tree and a waterfall. If there is a carving,
be sure to mark the Nakago “Hori Dosaku(engraving same swordmaker), etc.

Koshirae : Handachi Koshirae.
Saya :Beautiful kawarinuri saya.
Tsuba :Raise the waved ear on a thick claw-type iron stub
and carve a scroll and water wheel pattern on the surface,
and carve a demon character on the back
Mr. Morikawa lived in Edo Shiba, the master of Kiyotoshi
and produces unique works.
Similar to the later years of the Edo period master
Kiyotoshi. Masakage is well known Tsuba maker.
Menuki : On the syakudo nanako plate, Inlaid a cross
with gold Fuchikashira:Carving a family crest
on Syakudo nanako ground and giving
a gold color picture. Kiyotoshi who is a student of Hidehide and Hidechi,
and is called Seiryu sai Hidetoshi.
Living in Edo, Late Edo Period
Kojiri:Carving a family crest on a Syakudo nanako ground
and giving a gold color picture.

From Aoi Art : This work is the best work of the sculpture
of the second generationAwataguchi Oumi Kami Ikkanshi Tadatsuna
Hori Dosaku(engraved signature and also sword as same time)
It must be a work that the sculptural work and the sculpted sword are densely carved
in the sculpted sword in the most favored work of the swords collectors.
This work is engraved in the inscription in the work placed on the 475 page
of the sword shook Shinto Taikan. Perhaps it was marked as entering
As far as I know, it is considered to be only one strike and it is extremely valuable.
Mounting is a luxurious one for private use of good props that can use the Masakage
Tsuba highly remarks gorgeous mounting.
It is a masterpiece with the rare appearance and inscription of the same work
of the sculpture of Awaraguchi Oimi Kami Tadatsuna with Hori dosage
which is a wonderful carving that I want to recommend by all means.
Koshitae is also a work that can be evaluated. 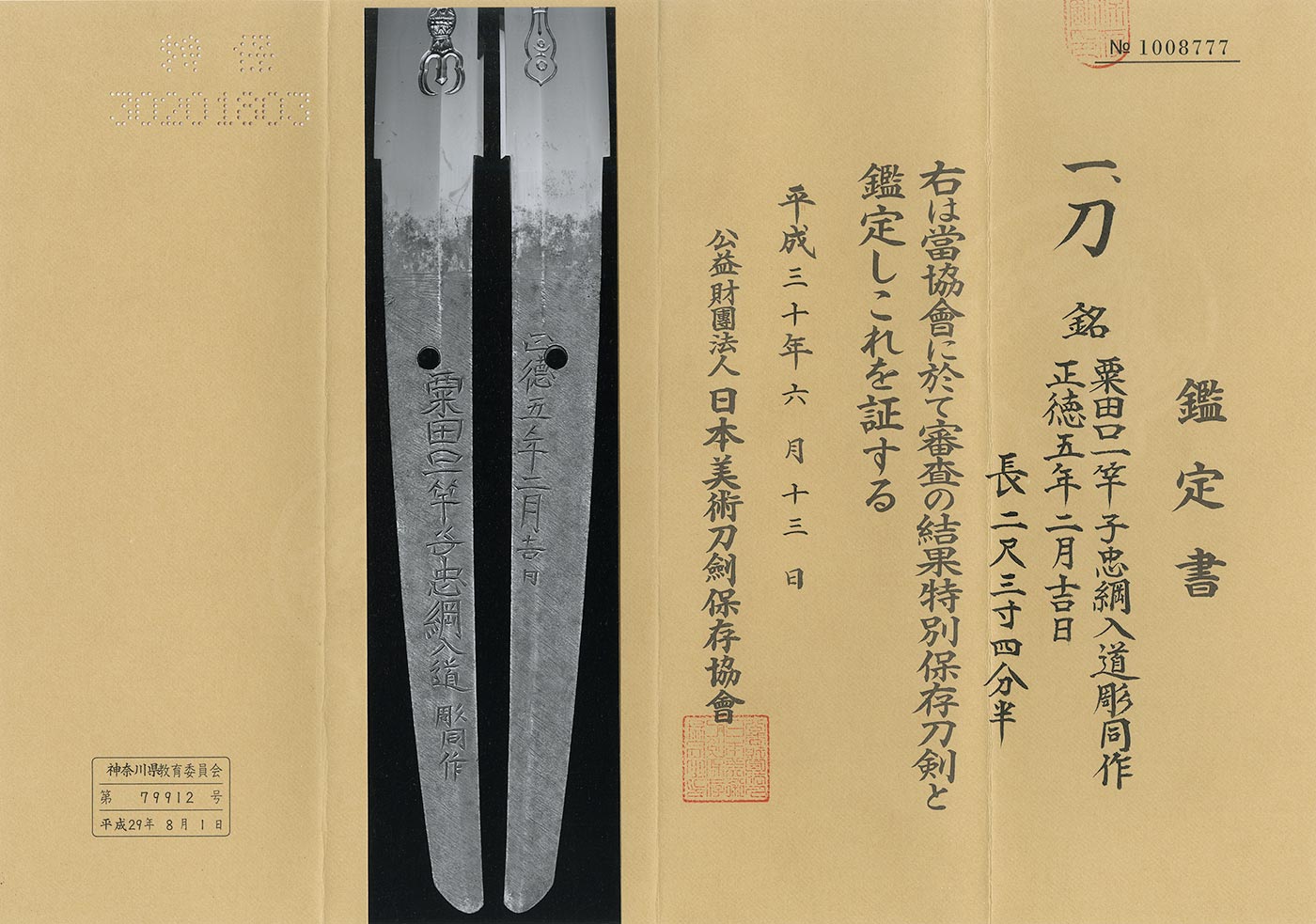 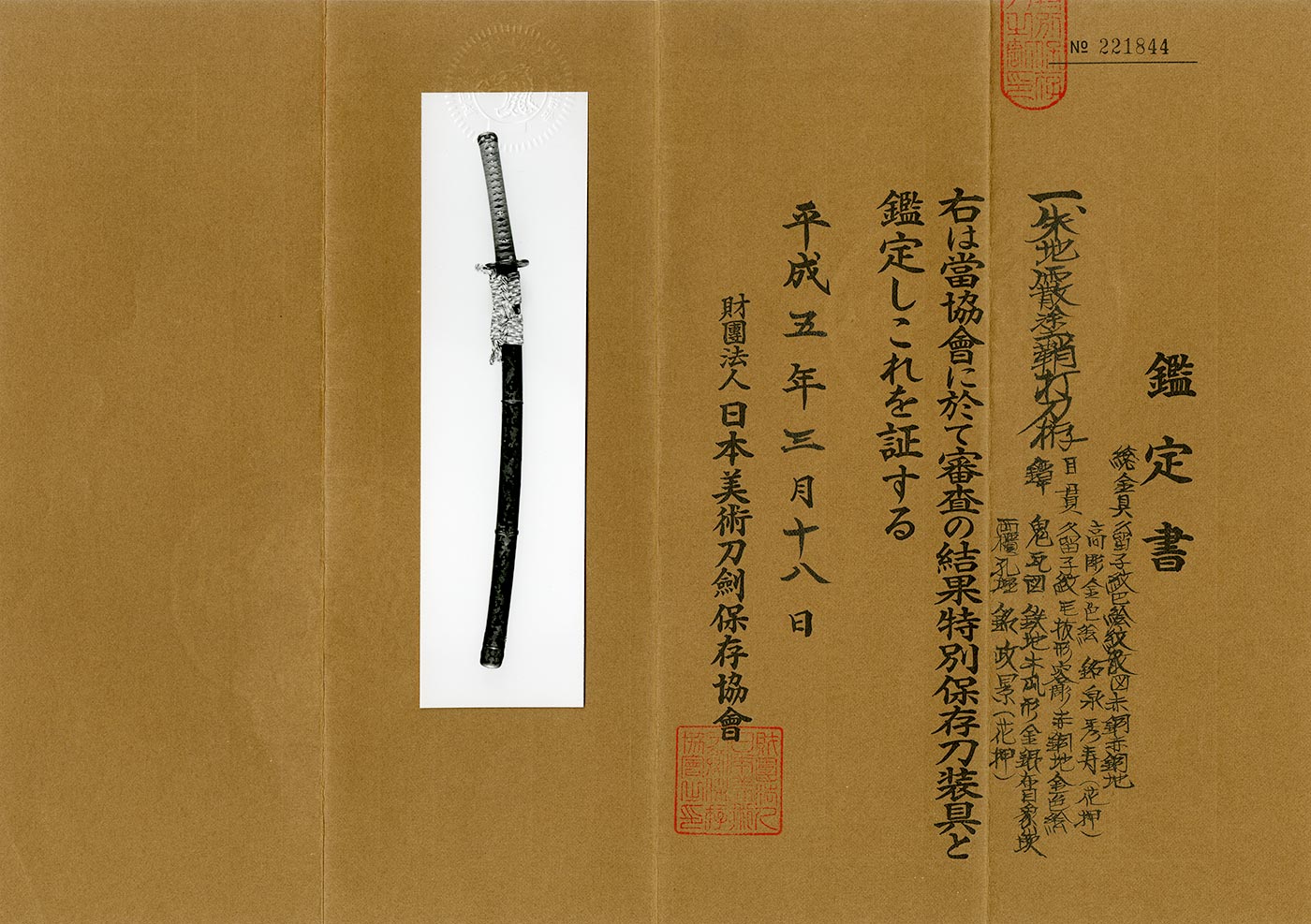 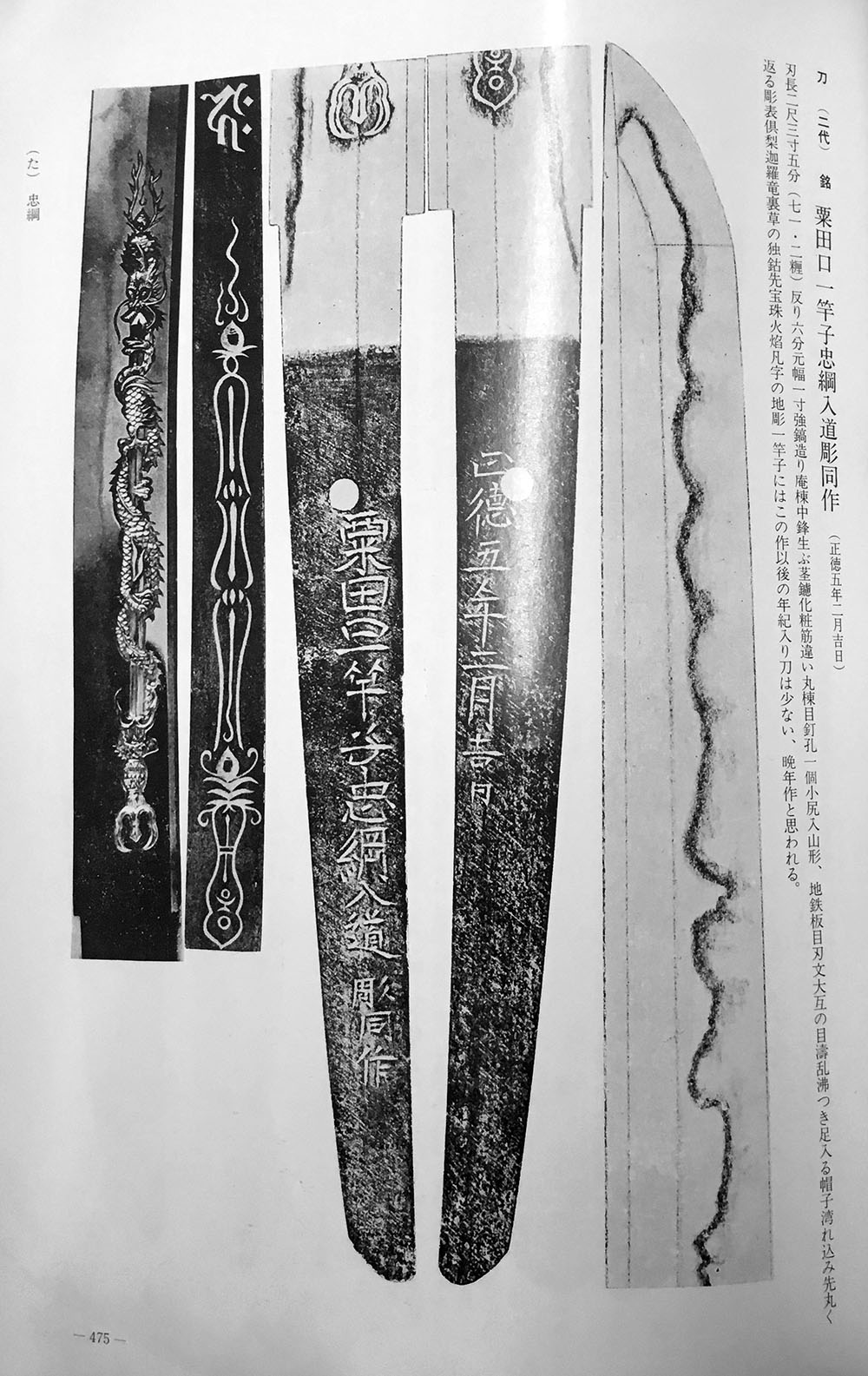